Friday means Friday’s Forgotten Books hosted by Patti Abbott on her blog. This week it seemed appropriate to cover a novel that has long been out of print for many years and is now back available to readers thanks to the e-book revolution. It is also very good and well worth your time…

Professor Carl Burns starts the fall semester at Hartley Gorman College preparing again to teach the   While he has a few jitters regarding the start of the new semester he is very much dreading the upcoming Edward Street Seminar as their most famous alumni, Edward Street, returns to the small campus. The idea of a seminar celebrating the work of Edward Street had been hatched by the new university president Franklin Miller as a way of raising money for the small college in Pecan City, Texas. Then he got the idea of putting Burns in charge of organizing it. Burns knows it has to go right. 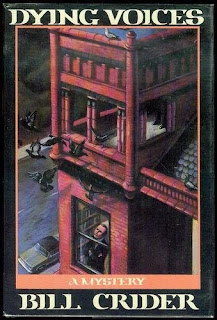 Years ago Edward Street had been an arrogant young professor. Then he hit literary fame as his book of poetry, Dying Voices, took off. That success led to yet more success with his novel, We All Die Today!  Street became a millionaire and never returned to teaching. It quickly becomes clear when he arrives back in town that his success has not changed his basic character. If anything, his success has made him more difficult to deal with and he now plans to settle old scores. He isn't the only one looking to settle up because Burns soon finds Street very much dead in his hotel room.

What follows is highly entertaining story of academic politics, crime, murder and a hint of romance as Burns works to solve this case and other issues. A comfortable cozy mystery story that, while different from the sheriff Dan Rhodes series, features a main character with some of the same attitudes and habits. Like Rhodes, Burns ask questions over and over again of the various people involved and gradually catches them in lies that eventually reveal their true nature. Like the early Rhodes books, Burns has a romantic interest that he courts like a traditional gentleman. And like in the Rhodes series, Carl Burns quickly becomes a character readers relate to and feel is an old friend.

Dying Voices, recently made available as an e-book is the second in the Carl Burns series, One Dead Dean. That novel is referenced some in this book though not to the level to ruin that read.

Material was purchased via a gift card for my use in an objective review.