Review: "Beat To A Pulp: Hardboiled Three" Edited by David Cranmer & Else Wright

“’Just the luck of the draw, “Caleb would say, “sometimes you pull aces and sometimes two’s, and one times you pull an ace when what you really need is that two to make a straight.’” (Page 85, “The Blow Jobs” by Josh Stallings)

That attitude towards life very well sums up the situation for all the characters in Beat to a Pulp:  Hardboiled 3.  The characters in these nine pieces are folks that almost always have losing hands. Sometimes they know it from the get go and other times they figure it out at just about the same second their light goes out. The nine works here pull no punches and one would not expect anything different in this series from publisher Beat To A Pulp. If you want sweetness and light and happy endings you should be reading elsewhere. Reality sucks and this is it.

“One Ashore In Singapore” by Andrew Nettle stars the book off with a man named “Chance” who is to be the courier for a very important package. He is supposed to bring it back to a restaurant named the “Jade Dragon” located in the small city of Yass which in turned is located a little north of Canberra, Australia’s capital city. The package isn’t ready yet according to Mr. Tan and it will be ready when it is. In the meantime Chance must wait for developments.

Doe is also a courier and sometimes more in “Doe In Headlights” by Patti Abbott. Doe has been sent out to an isolated cabin by her boss Feck. She does whatever he says and gets paid for it. At least there is variety in the work instead of just being a waitress in a bunch of crummy places. Now she is out in the woods 150 miles northwest of Detroit and waiting for the call and instructions. She is really good at waiting.

1915 in West Virginia is the setting with Jace Russell, Danville Fuller, and John Torrio gathered together  to restore a little order their regarding local beer sales. They are not the only ones involved in “Gunpoint” by Fred Blosser where scores and a business dispute will be settled one way or another.

Senior Editor Emily Eldridge at Bridal Beauty Magazine has a problem. Based on the threats she is getting in “Fair Warning” by Hilary Davidson somebody thinks she is dating her husband.  She swears she isn’t, but has her boyfriend Jason told her everything?  And if he isn’t the issue, what does she do?

According to his drunkard father, Matt, had no follow through on anything. There might be some truth to that, but in “The Follow-Through” by Chris F. Holm Matt might just be ready to do that while settling the past as well. 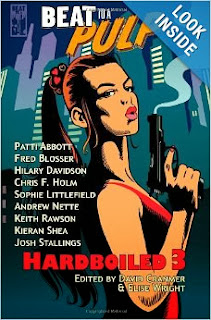 The size XXL granny panties have a lot of meaning in the story titled “Granny Panties” by Sophie Littlefield. That meaning can be transferred to others in this very short two page tale.

Keith Rawson comes next with “There You Are” featuring a guy doing what he has to do to survive. At least Arizona has a lot of desert to bury bodies in.  But, the soil is hard to dig through thanks to the rocks, clay, and tangled roots.

Life was rough from the get go for twins Caleb and Seth in “The Blow Jobs” by Josh Stallings.  As they grew older the scams and the stakes got bigger until everything is now on the line because the latest deal went way too far.

Last up is a play titled “The Speed Date” by Kieran Shea. Secrets are important in Washington, DC whether they be on a national security level or a personal relationship level. Those who observe Peter and Claire at the Mexican restaurant would have no idea how important this speed date truly is for both of them.

Three pages of short author bios which include other titles they are involved with bring the book to a close.

As one would expect from this series as well as this publisher, these are not tales designed to make you think happy thoughts about others. No, these tales are often about the unfairness of the life you were born into or the despair you created for yourself on this mortal coil through a series of bad choices. The results are nine good pieces that contain mystery, lots of violence and action, and the occasional obscenity as the works describe a hard reality.

Material supplied by publisher and editor David Cranmer for my objective review.