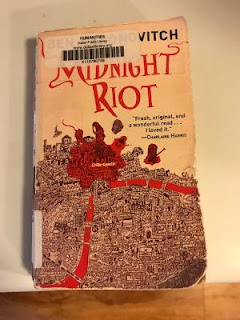 Midnight Riot by Ben Aaronovitch is the first book in The Rivers of London series. The book is called Midnight Riot in the USA, but it is called The Rivers of London in the UK where it was first published. This book is the first in a series of books and graphic novels starring Peter Grant who is an apprentice wizard and cop. Very soon Peter Grant is going to be shuffled off to a unit that handles paperwork only due to his academic background and never going to be allowed to catch any criminals directly. This all changes when he is standing guard at the scene of a murder and a witness to the murder decides to tell Peter what happened. Except the witness did not see much and is a ghost.

Peter Grant soon finds himself as apprentice to Inspector Thomas Nightingale. The inspector leads a small unit of cops that are wizards too. The unit is very secretive and includes members from other services. While he gradually learns the identities of a few of the other members, it is primarily up to him and Nightingale to solve the murder while trying to make sure the public does not know there is someone or something using magic to kill people. 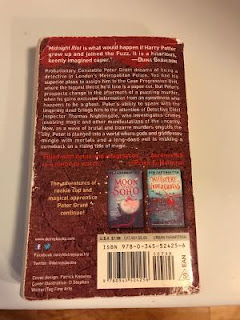 This book is part mystery, part fantasy, part politics, and part police procedural, all with a British setting and pacing. The setting of London is involved heavily and becomes a character in its own in the read. A read that is full of action, humor, and secrets. There is lots of foreshadowing and things that are a setup for the next novel in the series titled, Moon Over Soho. Unfortunately, that title is only available in eBook through my library and the hold is going to take quite some time.

Peter Grant relies more on his police training than his magic at this point in his life because he is still learning and he is a cop first. If the idea of cops having to see a ghost judge to get a warrant to arrest a ghost seems fun to you then this is a book for you.

This is a terrific series and I really like the way Scott has given his thoughts about Midnight Riot. Shared on Buried Under Books---
https://cncbooksblog.wordpress.com/2020/10/18/sunday-sharing-16-scotttipple-kevinrtipple/