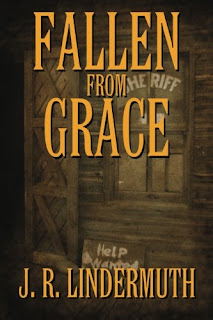 It is deep in the night October 5, 1897 when Sheriff Sylvester Tilghman is awoken by someone throwing small rocks at his bedroom window. Doctor Mariner has sent a young boy, Simon Hinkle, over to wake the sheriff.  The good doctor sent for the sheriff because he is treating a man that has been stabbed. Local resident Ollie Cramer found the man stabbed out on the road by the new bridge on the south side of town. A man that the doctor and almost no one else in the small town of Arahpot, Pennsylvania seems to know. 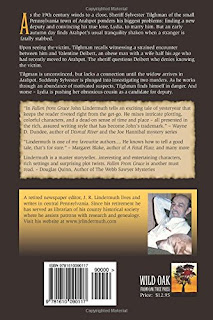 This is an engrossing and complex mystery that quickly pulls readers into the world of Sheriff Tilghman. A world populated by fully developed characters in all walks of life that give rise to side stories and details. A world that is slowly changing before readers eyes as these are the warning days of the telegraph, gas lights, etc. A world that is full of history and mystery as well as the occasional funny moment.

Fallen From Grace by R. R. Lindermuth is a complex mystery full of twists and turns.  Authentic to its time, the read from start to finish has a deeply western frontier type feel to it though the setting is Pennsylvania. The result is a very good read and one that works on all levels.

Nice review! Sounds like the book has plenty of "atmosphere" in it as well as a good mystery. Kudos to J.R.!