Crime just doesn't happen in the small east Texas town of LaBorde. It certainly doesn't happen to respectable people like Richard Dane and his family. Until that July night, Richard's toughest job was dealing with his young toddler son and his penchant for always spilling his milk. Then, that one night, he killed a man and everything changed.

Not that he had a choice. Not when his family, Ann and their four year old son Jordan, were at stake. Not when somebody had broken into their house located in the middle of a five acre plot on the lake road outside of town where the closest neighbor is a quarter mile away. Not when the intruder is in their living room and shoots first at Richard Dane. 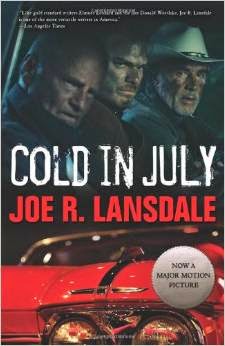 If the burglar hadn't missed, he might have lived. Instead, Richard Dane, by the sheer luck of it managed to shoot him in the head and drop him dead on his couch. A bullet through the right eye tends to kill a man and the man later identified by the police as Freddy Russel is very much dead.

For the police it is an open and shut case of self-defense. For the local residents who learn of the shooting in the coming hours the event is open to discussion and speculation. The shooting of an intruder is the biggest thing to happen in the area in quite some time. While Richard feels incredible guilt and remorse other folks can’t shut up about it. Though the townsfolk are talking about it and thereby causing stress on Richard and his wife, things are about to get much worse. For Ben Russel, an ex-con and Freddy's absentee father, the death of his son is an injustice that will be avenged.

Originally published in 1989, the book is being released again this month by Tachyon Publishing as a tie in to the upcoming movie starring Michael C. Hall, Sam Shepard, and Don Johnson. As part of their publicity campaign this reviewer was contacted by their publicist and offered a chance to read and review the book through NetGalley. Having been a fan of Mr. Lansdale's work for years I eagerly accepted despite the numerous problems I have had in recent months with the NetGalley service. Fortunately, in this case, I was able to make the system work and obtained the book.

Somehow, back in the day, I missed this incredibly suspenseful read the first time around. Probably because back in 1989 when this came out I was a father doing the best he could with a two year old son and a full load at night school at The University of Texas at Dallas along with a full-time retail job and a host of other issues. What reading I was doing was mainly for my schoolwork as double major in Literature and History and little else. Back then I was so buried with everything I was doing well to know my own name.

Cold In July features heavy amounts of what I always liked about Joe Lansdale books---normal run of the mill folks who, by some strange occurrence are thrust into situations far from their normal circumstances. Every man Richard Dane is just that---a regular guy, a father and a husband, who runs a small framing shop while doing the level best he can and is not expecting a lot in life. Things are simple and while he chafes a little under the circumstances of day to day life and his role, he truly has no idea how good he has it. Then he kills a man and that event has huge ripple effects, not only on himself, but on many other people.

The read is incredibly good. If the movie closely follows the book, and one gets the idea it will from the forward written by film director Jim Mickle and the afterword from the author, it should be one heck of a movie. Cold In July is one heck of a read and very much worthy of your time.

E-book version received from the Tachyon publicist via NetGalley in exchange for my objective review.