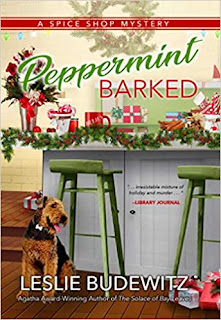 Relief from the heat of summer comes in the form of this Christmas mystery released in July.

The best part of this early holiday gift is that we can vicariously enjoy a Dickens themed festival in the hallowed halls of Seattle’s Pike Place Market. Add to that the spice shop milieu of the series—mmm, if I didn’t know better I could have sworn that the book actually smells of cinnamon. Unfortunately the holiday spirit is slashed by a murder in the Market’s wine shop, in a pool of blood redder than the shop’s cabernet—a young girl, Beth Yardley, a relative newcomer to the area, but who protagonist Pepper Reece knows is the victim and Pepper is on the scene when the wine shop owner’s ex-wife discovers the body. While the ex-wife is screaming, Pepper calls 911, and so begins her involvement.

All of this murder and the relationship and other mayhem that follow (revealed secrets and more!) start on Black Friday, the busiest day of the year for in person shopping. Finding a dead body was not on Pepper’s to-do list. The Spice Shop has designated the day, “Black Pepper “ Friday and is offering specials on that spice—cute and fun. One of the aspects of this book is that Budewitz, while fulfilling expectations of the cozy genre does not rely on old standards. For instance,  Pepper Reece’s boyfriend is not a cop. Ok, her first husband was, but they are still friends, not mortal enemies! The various family secrets come in a variety of flavors from harmless to not so much. The Market itself plays a role in helping Pepper solve the mystery and in hampering her. Budewitz lays down red herrings with the aplomb of a fisherman, quite apropos since the Fish market is one of the famous spots in the Pike Place Market. Family secrets of various folk come to light, motives abound. While Pepper navigates the  twists and turns of the mystery, we are treated to a cookie loving detective, and later to the recipes for some of those treats.

This novel is cozy all the way—great characters, fun complications in main character lives, and food. I love the inclusion of recipes in a book—and can’t wait for the next Pepper Reece mystery. In spite of the fact that this is the sixth in the Spice Shop series, it was my first, but by page five, Pepper Reece seemed like an old friend. Budewtiz skillfully weaves in “catch-up” material for her very likeable main characters  along with the threads of the new story. (I even began to fret for Pepper’s meeting with her fisherman boyfriend’s brother along with scratching my head along with Pepper as to who committed the murder.),Her descriptions of place and dialog are not only lovely, but they also advance the story at every turn. I found the sayings at the beginning of each chapter to be fun and on reflection , illuminating as well. It's easy to see why Budewitz wins so many awards, Agatha (three fiction and one for non-fiction) and a slew of others. Her work has also won or been nominated for Derringer, Anthony, and Macavity awards. A past president of Sisters in Crime and a current board member of Mystery Writers of America.

I plan to start reading the five I’ve missed to keep me busy while Leslie is at the computer with book number seven.

Note: I received an advance copy of this book from the publisher but with no expectation of the kind of review I would give.

Joan Leotta plays with words on page and stage. Her poetry, essays, cnf, short stories, and articles are widely published. Mysteries are favorite things to read.. short and long.. and to write.