“’It’s a new dark age,” he said at one point. “Nobody reads anymore. People are losing the ability to think. Television has destroyed us. I’m glad I won’t live to see the worst of it.’” (Dry Heat, Page 73) 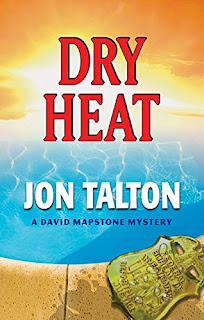 History and the dead, victims of crime or otherwise, have been constant themes of this enjoyable series. So too has been the price of progress and resulting urban sprawl and what that has done to Phoenix, Arizona and the surrounding area. Those themes continue in this third novel of the series, which also deals with modern day realities of the Russian Mafia and terrorism.

In 1948 the body of FBI Agent John Pilgrim was found floating in a canal outside what was then small city of Phoenix, Arizona. Over 200 agents spent more than two months working the case before it was ruled a suicide and buried by FBI management. Now, an elderly homeless man has been found dead, floating in a swimming pool, at approximately the same location. Homeless people die everyday across this country and that isn’t why the media are circling above by helicopter or clogging the neighborhood streets below with satellite trucks. Word is already out that the dead homeless man had the dead agent’s badge. A badge that vanished in 1948 and never found, was sewn inside the dead man’s coat.

An interagency taskforce is formed and launches an investigation with all the political backstabbing and power plays that go along with such things. Assigned to the case, Deputy Sheriff David Mapstone should be focused entirely at the matter at hand but he can’t focus that well. Recently married to Deputy Lindsey, he knows how lucky he is and is reminded thanks to the death of a good friend and mentor, how fragile life is. When the Russian Mafia begins to retaliate for the success of Lindsey’s team that stopped dead a multi million dollar fraud operation using stolen credit card identities, both Lindsey and David are forced to go into hiding. Hiding is something that neither one is good at, especially with Mapstone pushed to solve his own case.

Containing twists and at times intense action, this novel continues the overall character story arc begun in the first novel Concrete Desert. Enjoyable as the others, this novel does have more of a melancholy feel to it. Without giving too much away it is safe to say that some decisions for the future have to be made and the ending has enough wiggle room that it can be interpreted in two different ways.

Not to say both cases aren’t satisfactorily resolved, because they are. While the Russian Mafia case is resolved pretty much as expected, the Pilgrim case has one final twist at the end that is shocking in its simplicity. Little new is added to the characters as the novel has Mapstone contemplating not only the past of Phoenix and what progress has done to the city in the last fifty plus years, but his own checkered and complex past and recent developments. Some of this ground has been covered before in “Concrete Desert and Camelback Falls but is more of a constant presence in this novel. While containing plenty of action and complex cases, this book is a more introspective work and as such has a more melancholy feel than the previous two.

However, do not let that deter you from another excellent book in the series. As always, Jon Talton delivers a read full of interesting characters, vivid descriptive settings, and a pair of complex cases. The result is another twisting tale of the past and present and one very good book.


The concept of electronic medical records (EMR) is often touted as a way to save costs and lives while preventing human errors. As authors have repeatedly pointed out, an over reliance in computers and technology can have grave if not disastrous consequences for all. Neurosurgeon Allen Wyler explores both ideas and blends them together to create an interesting, occasionally graphic, read.

Dr. Tyler Mathews works at the Maynard Medical Center in Seattle, Washington. A hospital that never could have afforded the technology on its own became a test site for the Med-InDx Electronic Medical Record system. Everything about the patient is recorded into the system and according to the company, human error has been eliminated. The system is perfect and will save thousands of lives while speeding medical care. But as Dr. Tyler Mathews knows, it has taken a life.

Dr. Mathew’s patient, a young man suffering from epilepsy, received far more radiation than he should have reducing his brain to mush. As Mathews pushes the hospital management to investigate an error that seems to have vanished, his own medical expertise comes into question. Could he have made the mistake? He soon realizes he didn’t because he begins to hear of other similar treatment errors. Other cases where infallible records where changed, treatment was compromised, and patients died. The deaths may not stop there as someone is seeking the final solution to shut down Dr. Tyler Mathews permanently.

I’m not a big fan of novels purported to be medical thrillers as often then seem to cross over into the horror genre. However, in this case, while there are a couple of scenes that are rather graphic involving patients, they aren’t gratuitous and are used to push the story forward. As such, they are necessary and while they may make those of us who have had lots of medical problems a bit squeamish, the primary focus is on the mystery of why things are happening. That core mystery is very good and done very well.

With realistic detailed characters, plenty of scene description and an excellent premise, the author has created a twisting tale of greed, deception, and the low value some would place on human life. Written by a man who has been there and clearly done that, the author details the risks of such technology and the consequences should the technology fail while providing an excellent mystery read.

More next time and as always feel free to drop me a note here or at Kevin_tipple@att.net with your comments, observations, and suggestions.

One of the recent trends of the last couple of years I have noticed is the high number of books using the concept of offshoot Mormon groups doing bad things. While some authors take the idea in different directions, most seem to use the same basic template. An abusive man physically strong in stature with a deep voice leads the group, the abused women (often sisters from the same family) are all fearful and married to the man and the children are abused. Everything is done in the name of religion, which allows the author to lecture the reader about the evils of religion gone amok. This is exactly what Nevada Barr does in her latest offering, “Hard Truth.”

Newly married Ranger Anna Pigeon has been assigned to Rocky Mountain National Park in Colorado. Beyond the usual park problems, the staff has been severely stressed by the recent disappearance of three young girls while in the park from a nearby breakaway Mormon sect. The girls, with their youth leader, were left in the park while other members of the group hiked out. The young girls disappeared and despite constant searches and investigations into everyone’s background, especially the youth leader, the three girls have not been found.

Then two of the girls stumble out of the woods at the Sprague Lake Handicamp and straight into the arms of a paraplegic and her elderly Aunt. Heath, a climber, has been confined to a wheelchair since falling and receiving severe injuries approximately nine months earlier on Longs Peak. Despite the fact that she is lucky to even be alive according to everyone else, she doesn’t think so. Mad at the world for her injury and her own body for failing to heal so that she can walk again, she has slid into a deep angry depression that even her no nonsense Aunt, Gwendolyn Littleton, can’t get her out. But when confronted by two children, clearly deeply traumatized on a physical as well as an emotional level, Heath is forced to reassess her life.

Coming from opposite ends of the spectrum in personality and motivation, Heath and Anna have a tenuous working relationship as they begin to investigate what happened. Heath exploits the bond she made with one child while Anna exploits her position as District Ranger to investigate a case that the sect does not want investigated in any way. A third child is still missing and both Anna and Heath wonder if she is still alive. What happened out there in the woods? And for Anna, she also wonders why the return of the children has coincided with other strange events in the park.

This isn’t the first time Nevada Barr has considered the concept of pure evil and no doubt won’t be the last. Once again she tries to define it, to show its human face, to explain it, and deal with an evil that is almost perfect in its ability. As such, much of what she has written before, Molly’s lectures and advice, etc. is dusted off and placed before readers once again. This lends a certain redundancy to the work, as much of what is in this novel seems to have had the identifying names changed and little else.

Because of that fact, some factual location errors, and the for the most part stereotypical characters, the read is average at best. While the tale itself is interesting and does hold reader attention, the noted flaws remain prevalent from start to finish. Of course, like everything else in life, your experience may vary.


More next time and as always feel free to drop me a note here or at Kevin_tipple@att.net with your comments, observations, and suggestions.

I am very pleased to announce that I am now supplying book reviews to the Vacant Funhouse. My reviews are up at http://vacantfunhouse.com/reviews.html and currently cover:

The President's Assassin by Brain Haig

Cut And Run by Ridley Pearson

Eight Of Swords by David Skibbins


More next time and as always feel free to drop me a note here or at Kevin_tipple@att.net with your comments, observations, and suggestions.