Scott had a dental deal yesterday and things are fine. It was a very long day with that and some errands that had to be done.

Operations around here resume Saturday with a previously scheduled review by Scott. 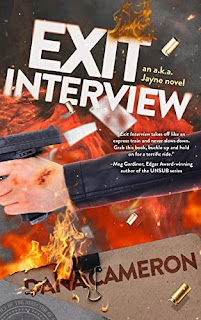 Jayne is working on bringing a major player in the illegal weapons industry to account when her boss pulls her off the case. Next thing she knows, the arms dealer is dead, she’s accused of killing him, and her former colleagues believe she’s turned traitor. Her sole support is another operative named Nicole Bradley, whose cool analytical intelligence makes a satisfying contrast to Jayne’s more physical approach to problem-solving. The two conscript Washington Post reporter Amy Lindstrom because of her investigative work on the arms dealer.

What ensues is a hard-charging dash to learn who killed the illicit munitions supplier, find the remaining weapons caches, salvage Jayne’s reputation, and get Amy the Pulitzer story of a lifetime. It involves sprinting all over Washington, DC, and Arlington, Virginia; readers familiar with the area will easily follow the trio’s trail across the region, recognizing subway stops and well-placed landmarks. Car chases, gunfire, explosives, hand-to-hand combat, and other essential elements of modern fictional spycraft are involved. Nicole’s skill with backdoor IT contributes significantly to achievement of the end goal while civilian Amy is aghast at the mayhem that unfolds in front of her.

Jayne is a mashup of Orphan X and Xenia, Warrior Princess. Her resourcefulness is limitless, her energy is unflagging, and her courage is breath-taking. I found this fast-paced story engaging, an original spin on black ops thrillers. An excellent way to spend a holiday afternoon! Recommended.

SleuthSayers: Happy in My Shorts by John Floyd

SleuthSayers: Happy in My Shorts:    And why wouldn't I be?--I live in what some call the middle of the Deep South, and for about seven months of every year down here, lo...
Posted by Kevin R. Tipple at 10:07 AM No comments:

Beneath the Stains of Time: My Mother, the Detective: The Complete "Mom" Short Stories (1997/2016) by James Yaffe

Beneath the Stains of Time: My Mother, the Detective: The Complete "Mom" Short...: Around this time last year, I reviewed James Yaffe 's second of four novel-length "Mom" mysteries, Mom Meets Her Maker (1990)...
Posted by Kevin R. Tipple at 1:13 PM No comments:

Up on KRL this morning reviews and giveaways of more Christmas mysteries! "A Christmas Candy Killing": A Killer Chocolate Mystery by Christina Romeril, "Dashing Through the Snowbirds": A Meg Langslow Mystery by Donna Andrews, "High Spirits": A Haunted Haven Mystery by Carol J Perry, "It Came Upon A Midnight Shear": A Riverbank Knitting Mystery by Allie Pleiter, and "Christmas Scarf Murder" by Carlene O'Connor, Maddie Day and Peggy Ehrhart https://kingsriverlife.com/12/03/more-christmas-mysteries/

And a review and giveaway of "The Twist of a Knife" by Anthony Horowitz along with an interesting interview with Anthony https://kingsriverlife.com/12/03/the-twist-of-a-knife-by-anthony-horowitz/

We also have the first of several Christmas mystery short stories going up this month-"Police Navidad" by Josh Pachter https://kingsriverlife.com/12/03/christmas-mystery-short-story-police-navidad/

For those who prefer to listen to Mysteryrat's Maze Podcast directly on KRL you can find the player here for the latest episode which features an excerpt from "Lost and Found in Harlem" by Delia Pitts and read by Theodore Fox https://kingsriverlife.com/12/03/mysteryrats-maze-podcast-featuring-lost-and-found-in-harlem/

And we have a review of the latest season of "My Life Is Murder" on Acorn TV https://kingsriverlife.com/12/03/acorntv-streaming-kiwi-delight-my-life-is-murder/

Up during the week we posted another special midweek guest post this one about The Mesdames of Mayhem's Fifth Anthology, "In the Spirit of 13" https://kingsriverlife.com/11/30/the-mesdames-of-mayhems-fifth-anthology-in-the-spirit-of-13/

Up on KRL News and Reviews this week we have a review and giveaway of a signed copy of "The Language of Bodies" by Suzanne DeWitt Hall https://www.krlnews.com/2022/12/the-language-of-bodies-by-suzanne.html

And a review and ebook giveaway of "The Notorious Noel Caper" by Sally Carpenter https://www.krlnews.com/2022/12/the-notorious-noel-caper-by-sally.html

And a review and ebook giveaway of "A Dozen Days of Death" by Gin Jones https://www.krlnews.com/2022/12/a-dozen-days-of-death-helen-binney.html

Happy Holidays!Lorie
Posted by Kevin R. Tipple at 10:45 AM No comments: 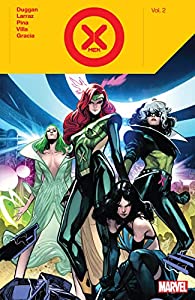 X-Men Vol 2 by Gerry Duggan introduces a new hero. Modok engages in a disturbing experiment on a cruise ship and soon makes some new friends. The X-Men take on gameworld (a sort of celestial casino) with the fate of countless planets hanging in the balance. The X-Men have threats coming from all directions. Luckily, Cyclops is ready to lead them against all threats.

Every team member gets their shot in the sun. Cyclops has some great moments that remind me why I think he is so awesome. Wolverine, Rogue, and Jean are great. The art is great and there is plenty of action and humor. It is almost a perfect volume.

I just have one complaint. To explain causes major spoilers, so read on at your own risk.

They are blowing up the team as pretty much everyone is moving on except for three characters. In the universe time that started with the first book, it allegedly has been a year. But, there have only been 12 issues of the run, and readers have to say good bye to most of the characters and hello to new team members.

Overall, I enjoyed this read and I am eagerly anticipating the next volume with the new team.

My reading copy from the Central or Downtown Branch of the Dallas Public Library System.

One Bite at a Time: Things All Writers Should Beware

One Bite at a Time: Things All Writers Should Beware:   Gabino Iglesias is a writer, professor, book reviewer, editor, and translator living in Austin, TX. He is the author of Zero Saints and C...
Posted by Kevin R. Tipple at 12:19 PM No comments:

Writer Beware: How to (Maybe) Get Out of Your Contract When Your Scam Re-Publisher Ghosts You

Writer Beware: How to (Maybe) Get Out of Your Contract When Your Scam Re-Publisher Ghosts You

Email ThisBlogThis!Share to TwitterShare to FacebookShare to Pinterest
Labels: contracts, December 2022, How to (Maybe) Get Out of Your Contract When Your Scam Re-Publisher Ghosts You, publishing, Victoria Strauss, Writer Beware

Bookblog of the Bristol Library: Chapter and Curse by Elizabeth Penney

Bookblog of the Bristol Library: Chapter and Curse by Elizabeth Penney: Reviewed by Jeanne Imagine being a bibliophile librarian in Vermont and being told that your family owns a classic bookshop in Cambridge...
Posted by Kevin R. Tipple at 11:16 AM No comments:

Jerry's House of Everything: FORGOTTEN BOOK: THE HILLS STAND WATCH by August Derleth

Jerry's House of Everything: FORGOTTEN BOOK: THE HILLS STAND WATCH:   The Hills Stand Watch by August Derleth (1960) August Derleth, the Sage of Sauk City, was a one-man pubishing phenomenon.  Novelist, journ...
Posted by Kevin R. Tipple at 10:25 AM No comments:

Bookblog of the Bristol Library: Small Change: The Secret Life of Penny Burford by ...: Reviewed by Janna   Penny Burnford grew up as the daughter of a minister in a very generous household.  The book takes us back to her ...
Posted by Kevin R. Tipple at 9:52 PM No comments:

Lesa's Book Critiques: WHAT ARE YOU READING?

Lesa's Book Critiques: WHAT ARE YOU READING? 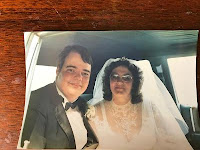 Nothing has ever been right again. It has been five very long years since Sandi moved on without me. We were supposed to have a small place out somewhere with a few horses running around, a wide porch with rocking chairs, and grandchildren at our feet. We were supposed to grow old together.

Instead, cancer took her, and changed everything. Not a day goes by that I don't wish I could bring her back. Or, even more, that I had shuffled off this mortal coil right with her.

Going on is brutally hard. Today is one of those days that the universe really puts it to you with both boots.