Reviewing: "Beneath A Weeping Sky" by Frank Zafiro 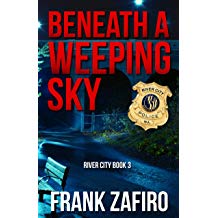 It begins in March 1996 in River City, Washington. Evil lurks in the city and from time to time rears its ugly head. In this latest in the police procedural series written by Frank Zafiro, law enforcement must deal with a serial rapist. They start further behind then normal because the initial assault was not reported by the victim. For Detective John Tower the case is different than the norm and before long becomes an obsession for him. As the attacks mount and become increasingly violent, Detective Tower and the men and women of the River City Police Department must stop him before he begins killing his victims.

What has made this series so good, beyond the cases author Frank Zafiro depicts, are the off duty lives of the characters. These are flawed and realistic human being and not some caricature of super cops. Reminiscent of the old TV series “Hill Street Blues” that spent just as much time portraying the characters lives off duty and how it impacted their work and vice versa, the same is true in this series. Personal demons of varying severity haunt a number of the long running characters as do their successes.

The result is another complex read that is somewhat difficult to describe. The only negative criticism is the chapter towards the end of the book centered on the serial rapist. While readers frequently view events through his point of view throughout the book, this chapter brings the read to a screeching halt as the back story which caused the character to act the way he does now is revealed. Much of this is rather clichéd and stereotypical and most readers would have figured it out long before reaching this part. There is one rather shocking aspect of the back story which is revealed and one that could have been hinted at without going into such graphic detail.

The chapter primarily serves as unnecessary distraction from an otherwise very good book. The author continues to evolve from novel to novel and the tales steadily improve in complexity. Released from Gray Dog Press this month, this is a very good book well worth hunting down and reading. For maximum enjoyment, the earlier novels in the series, “Under A Raging Moon” (a revised and re-released book) and “Heroes Often Fail” should be read and are available through the same publisher.


Material provided by the publisher at author request in exchange for my objective review.