Reviewing: "A Patchwork of Stories: 9 Tales from Sunny Side Up to Over Hard" by Kaye George 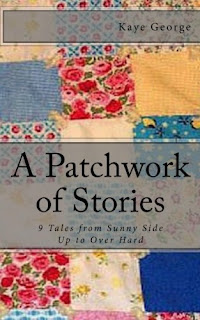 Texas author Kaye George has put together a small and intriguing sample of her work in this collection. These nine tales were previously published online and in print and nearly all won awards. The tales are flash fiction stories as well as several somewhat long pieces. Due to their length, it is not really possible to give very many details on the individual stories without ruining the read. Primarily stories of revenge and/or desperation, these stories pass by quickly while creating mental images that linger long after the small 90 page book is finished.


The book opens with the story titled “FLASH MOB” and features Melissa. Suffering cancer treatment is tough. Dealing with a cheating husband is tougher.

Cheating male spouses is a theme common throughout the book. The same issue confronts the main character in a flash fiction piece titled “THE FALL.”

We have all seen the news stories about fad diets where supposedly one could eat just a certain item all the time and lose the weight. Remember the grape fruit diet of a few years ago? That sort of thing is the premise behind the tale “THE FAT GURU.” When chocolate again becomes the next serious diet craze you can say you read about it here. One just knows it can’t be a good idea.

“WEST TEXAS WAITIN” comes next starting on page 22 and features some of the strongest images in this small book. In this haunting story, a young woman waiting for her guy to come off the rodeo circuit and take care of her and their son to be. Life has been hard for a long time and Harold is her ticket to better times. At least, that was their plan.

Kaye George takes readers from West Texas to Detroit for “DEVIL’S NIGHT” set on Halloween Eve. The night is well known in Detroit and elsewhere for the arson fires that happen. The Devil is about to get a well-deserved new tenant if the plan works.

“RETRANSFORMATION” comes next and features a death at a writer conference, back stabbing by a famous author, and werewolves. Good stuff that explains why some authors get where they are today. You may not look at your fellow writers at a convention the same way ever again.

For most, life after high school is not as expected. Kimber isn't the only one to have things go differently than she thought they would in “LEVITTOWN LOUIE.” Mr. Davis McFeegle is her latest mistake and apparently she wasn't the only one to make a mistake regarding him.

Buying a TV has serious consequences in the flash story “NEW TV.”

The final tale is “HANDBASKETS, DRAWERS, AND A KILLER COLD” and was nominated in 2009 for the Agatha Award for Best Short Story. Being a cop in Chicago is hard enough. Having an idiot for a brother-in-law, an unhappy wife, and a bad cold makes everything harder for Officer Cal Arnold---including doing the right thing.

AT 90 pages, this small read is a fast one featuring many different characters and writing styles. While the themes of revenge and/or desperation are frequently present, and the male spouses are almost always cheaters, how the situations develop and are resolved is very different. Not only does the book provide reading pleasure with each tale, it also provides an introduction to her writing talents (if you were not already aware) in preparation for the release of her comic mystery novel, CHOKE, by Mainly Murder Press this May.


Paperback review copy was provided by the author in exchange for my objective review.

Email ThisBlogThis!Share to TwitterShare to FacebookShare to Pinterest
Labels: A Patchwork of Stories: 9 Tales from Sunny Side Up to Over Hard, crime, fiction, Kaye George, mystery, short stories, texas author