FFB Review: "THE GIRL WITH THE LONG GREEN HEART" by Lawrence Block--- Reviewed by Barry Ergang

Friday means Friday's Forgotten Books. Barry Ergang is back with the review below to close out the year. For the complete list of books, authors, and reviewers, please surf over to Patti Abbott's excellent blog.......... 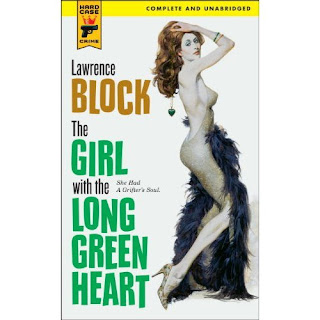 THE GIRL WITH THE LONG GREEN HEART (1965) by Lawrence Block

Having spent seven years in San Quentin after a con game went bad, and determined to walk a straight-and-narrow path to avoid a return to prison, John Hayden now lives a deliberately spartan life in a small, cheap room and works as the assistant manager at a bowling alley in Boulder, Colorado, earning eighty-five dollars a week. He's taking a correspondence course in hotel management, hoping one day to buy a roadhouse outside the city that has rooms upstairs and cabins out back. "The current owner doesn't know what to do with the place," he tells Doug Rance. "He's a lush and he just knows how to sell drinks and how to build himself a case of cirrhosis. With the right kind of operation the place would be a gold mine."

Rance, nine years younger than Hayden's forty-two, is someone Hayden met years earlier but never worked with, and who has come looking for him, hoping to persuade him to go back on the grift. Rance was recently in Las Vegas where he met a woman named Evelyn Stone, the titular character. She complained to him about her boss, a man named Wallace J. Gunderman, the intended target of Rance's depredations—the "mooch," as marks are referred to in this novel—whom for personal reasons she'd love to see get taken for a great deal of money. Gunderman made his money buying and selling land, and had already once been the victim of a con game involving property in Canada. Rance wants to work yet another Canadian land grift on Gunderman, and thinks Hayden would be the ideal partner. Evelyn Stone would also get a cut for her role in the game.

As much as he fears the prospect of going back to prison should something go wrong, Hayden realizes that his portion of the money they stand to take Gunderman for would enable him to fulfill his roadhouse dream almost immediately instead of requiring him to work for chump change and save perhaps twenty-five hundred dollars annually for the next nine or ten years while living a desolate excuse for a life. And so he declares himself in, and he and Rance go to elaborate lengths to stage the operation and psych out the mooch. Gunderman is neither stupid nor a fool; he needs to be carefully suckered into buying what Hayden and Rance pretend to sell. They execute their scheme thoroughly and meticulously, taking into account every contingency. They have everything covered, right? Nothing could possibly go wrong, could it?


If I told you, you'd want to kill me for spoiling the fun and excitement. As it is, I've given you the barest outline of the novel's beginning without revealing necessary and intriguing details, minutiae, and subsequent plot developments.

Narrated in the first person by John Hayden, in an unadorned, often staccato prose style, The Girl with the Long Green Heart is one of Lawrence Block's earliest efforts. It amply demonstrates the storytelling skill, sense of character and pace, that would ultimately win him the Mystery Writers of America Grand Master Award, and many other literary honors. As has usually been my experience with a Block novel, this one was very hard to put down, and is highly recommended to fans of criminous fiction.

Barry’s books for sale from his personal collection are at http://www.barryergangbooksforsale.yolasite.com/.

Thanks for mentioning this book. It strikes a chord in my memory and I intend to revisit the scene of the crime so to speak.

You're welcome, Vonnie. The scene is eminently worth revisiting.