It is Friday and that means it is time for FFB. Barry is back today for FFB with an all new review of a book I had not heard of before Barry told me about it in a recent phone call. Patti is not collecting the links this week so make sure you check out the full list over at Todd Mason's blog. Enjoy your Friday and the weekend. If your NFL team is still in the quest, good luck!

SECRET OF THE RED ARROW (2013) by Franklin W. Dixon
Reviewed by Barry Ergang

I’m pretty but not one hundred percent sure that I stopped reading juvenile fiction at around age eleven, because I am certain I read The Hound of the Baskervilles at that age, after which I moved on to the likes of Agatha Christie and Erle Stanley Gardner. I mention this for the benefit of those who might not recognize the name of the author of the book under consideration here—someone who, if his weren’t a “house” name, would be well into his second century. 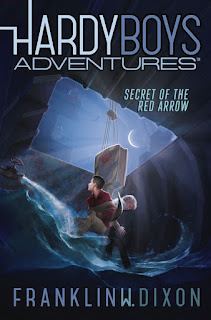 That’s right, America: at a few weeks shy of 71 years-old as of January 2018, yours truly, unapologetic curmudgeonly old fart that I am, decided to read a new Hardy Boys mystery.

And new is the operative word, particularly with regard to its approach. The books I originally read, thanks to my mother having given me the first two in the series, The Tower Treasure and The House on the Cliff, when I was seven or eight, as well as those I acquired during the several years that followed, were published before I was born. They were written in an older style, and narrated in the third person. Published by Grosset & Dunlap, which also published the Nancy Drew, Tom Swift (junior and senior), Bobbsey Twins, and other series aimed at young and young adult readers, many of the original Hardy Boys titles were subsequently “updated" to appeal to readers born in the late Fifties and early Sixties. (This probably happened with the Nancy Drew series as well.) Some of this is explained at The Hardy Boys Unofficial Home Page, as is the fact that a court battle gave Simon & Schuster the rights to publish new Hardy Boys series. Secret of the Red Arrow is the first in the “Adventures” series.

There are some significant differences between the original and this new series. Instead of a third-person narrative, we now have alternating chapters by Frank and Joe Hardy told in the first-person, and in a very contemporary style which includes, among others, references to Quentin Tarantino, David Letterman, the war in Afghanistan, and the movie Halloween. Their father, Fenton Hardy, has retired as a private detective and now “writes books on the history of law enforcement.” In the original books, the boys lived with their father and their Aunt Gertrude. Mom’s absence was never explained, as far as I can recall, but I always suspected that she had died rather than divorced Fenton and moved on. In this series, Mom is alive and well, selling real estate and living with her husband. Aunt Trudy also lives with them.

As far as the local authorities in the town of Bayport are concerned, teenagers Frank and Joe have become subject to what’s known as “the Deal”: “Growing up, Joe and I would help him [Fenton Hardy] on his cases. We were proud of our successes. But after one too many close calls, things started to get a little out of hand, for reasons having to do with private investigators’ licenses (we didn’t have any), insurance (none of that, either), and the threat of being sued by every hoodlum we ever put under a citizen’s arrest….So with a few phone calls, including references from our principal and assurances to the police chief and state attorney general, we ‘retired.’” But as Frank later admits: “That cozy arrangement…lasted about a month before Joe and I started going crazy. Maybe being a detective is something in your blood….Since then, we’ve started taking the occasional case for a good cause or to help a friend, but we try to keep it confidential.” The potential consequence for violating the Deal is being shipped off to a behavior modification facility. Suffice it to say that the local police inevitably clash with them throughout the course of their “non-Deal” investigations.

Secret of the Red Arrow starts out with Frank being one of the many victims of a bank robbery which turns out to be a frightening but elaborate prank, courtesy of amateur film-maker and fellow student Seth Diller. It revs into high gear when Sharelle Bunyan implores the brothers to help them with what seems some kind of impossible crime: someone somehow breaking into the Bunyan family home to make a video recording of the boys’ schoolmate, Neal (star linebacker known as “Neanderthal”), while he’s sound asleep and after he’s begun receiving strange e-mails. Subsequently, two masked figures break in and assault him, and leave a red arrow painted above the bedroom door frame.

What is Red Arrow, a mysterious individual or a sinister criminal organization? As the boys investigate, putting themselves in danger of violating the Deal as well as in physical peril, they learn that Red Arrow has tentacles which extend to merchants and others in the town of Bayport.

I have to admit that I thoroughly enjoyed this visit with fictional characters from my boyhood. It moves swiftly—I read it in just a few hours—and nicely mingles mystery, suspense, and humor. My only disappointment was that the “impossibilities” were never explained. In spite of that omission, deliberate or otherwise, I can recommend Secret of the Red Arrow to adults who are feeling nostalgic, and who might be curious about a modern take on a classic series.

If you’re feeling nostalgic for some of Derringer Award winner Barry Ergang’s work, you can find it at Amazon and Smashwords.

I had to squint to be sure I was reading your title accurately on Todd's list, Barry, and then felt the rush of nostalgia that carried me back to when I was a boy. I had no idea The Hardys were still being written. Thanks for this fine review. I'm tempted to enter the Kindle time machine and see what I can find of the "Dixon" canon.

I'm glad you enjoyed the review, Matt. If you obtain a copy of this particular book, I'll be anxious to hear your take on it.