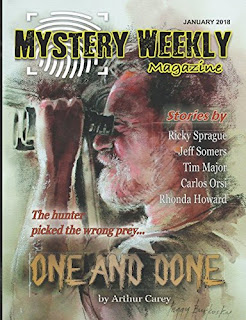 Mystery Weekly Magazine: January 2018 opens with “One And Done” by Arthur Carey. It is a hot afternoon in late summer in the park as Charlie Anson watches birds through old binoculars. He is about to call it a day when an argument between two men further along the trail turns violent. Witness to a murder, Charlie leaves as fast as he can in a tale that constantly shits point of view between numerous characters with no warning.

Chris had a house guest that just won’t go away in “The International (Marketing) Incident” by Rickey Sprague. Using food and not replacing it was bad enough. Now Dan is over at Marcella’s and wants press kits and other items. Chris is going to have to comply as Marcella Ginty is a member of the Hollywood International Press and therefore very important to the studios. One such studio employs Chris and that means he has to give her everything she wants. The fact that Dan is requesting loads of stuff is irrelevant. The fact that Marcella is in her early 80s and Dan is her latest boy toy means that Dan is working an angle. Chris just does not know what that angle is yet.

After the divorce, Dee got the house out on Staten Island and he didn’t care. His heart was in Manhattan and he’d never liked the house or the drive back and forth to the precinct. She’d gotten remarried to a seemingly decent guy. He had died some time ago and now Dee is dead. He has questions in “Arthur Kill” by Jeff Sommers and he will get answers in this locked room mystery.

Politics in academia can be ruthless. Roberto is in real trouble in “The Adventure Of The Dead Frog” by Carlos Orsi. The Research Ethics Committee is going to meet and evaluate his conduct regarding a certain frog specimen Roberto brought back to the institute. The frog was seized as evidence and it is now missing from the locked safe inside the locked vault. A locked room mystery is at work here and it is a very good one. 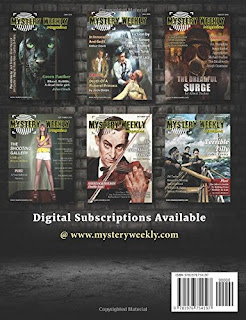 Ephraim Harris used to be a pickpocket artist. That was until a certain person began teaching him far better skills in “The Pale Shadow And the Conjuror” by Tim Major. The art world will never be the same.

The You-Solve-It puzzle this month is by Rhonda Howard. In “Smoke Test” Detective Gary Trager of the 14 Precinct is on his final day of service after thirty years on the force. Tiffany Trustwell was robbed, got a bit banged up, and is in the hospital. She knows important people and therefore has connections that matter. So Chief Hudson wants him to look into the matter and figure out quickly who did it.

The issue concludes with the solution to the December You-Solve-It puzzle also written by Rhonda Howard.

The stores in Mystery Weekly Magazine: January 2018 are all solidly good ones. They are complex tales in a variety of settings that feature characters dealing with threats and worse by others. While my personal favorites were the two locked room mysteries, the entire issue is another fun to read solidly good one.

For quite some time now I have been gifted a subscription by the publisher with no expectation at all of a review. This month I made the decision to read and review. I expect to do more of that going forward depending on my usual personal time constraints.

Hi Kevin. I've sold a Holmes pastiche to them, though it won't appear til the Holmes special in 2019...!

Very cool. I have not yet read their Sherlock Holmes issue from last year.