Heirs of Empire: The Scourwind Legacy Book One by Evan Currie is a military sci-fi drama set on an unnamed world. The empire is one of the most powerful kingdoms on the planet. Led by the Scourwind family, the empire is ruled with an iron fist. That is until a successful coup by General Corian overthrows the Scourwind family throwing the empire into chaos. The Scourwind Twins, Lydia and Brennan, are forced to run for their lives. Their best hope is former Cadre (think elite special ops with bloodline link through the DNA to certain technology) Mira Delsol who has become a pirate for the forces still loyal to the Scourwind family. Will the twins alongside Mira be able to regain their throne or will the empire crumble from within?

This book is action tale on a complicated world with a rich back story. The empire’s secrets have consequences for all. There are plenty of interesting characters inhabiting this world and plenty of hints about what the plot points of future novels could be about. 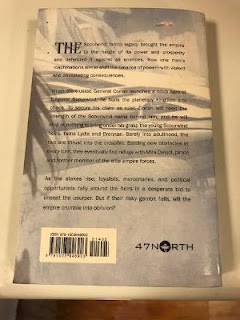 General Corian has his reasons for overthrowing the Emperor and might even be right. General Corian is not a good person, but he is doing what he thinks is right. Mira Delsol is a young risk taker former Cadre member turned pirate with trust issues. Lydia is a troublemaker and first in order of succession. Her twin brother does not care about the crown as he is more comfortable being a pilot than anything else. He is a great pilot, but too arrogant for his own good.

My favorite character was William Everett. He is a Cadre turned babysitter and trying to keep everyone fighting smart. He is very frustrated as the younger characters take a lot of risks and do things differently than he would. He is the main humor angle in the book and wields a sharp tongue.

Heirs of Empire: The Scourwind Legacy Book One by Evan Currie by Evan Currie is good book that introduces the readers to a rich and complicated world. An Empire Asunder is the second book in the series and is on my library hold list. That books appears to be the conclusion to this two-book series.

Heirs of Empire: The Scourwind Legacy Book One