Scott's Take: The Dark Avengers In: The Patriot List by David Guymer 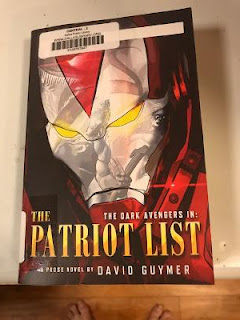 The Dark Avengers In: The Patriot List by David Guymer is set in the Marvel Universe during the Dark Reign years in the Marvel Universe. Norman Osborn, aka the Green Goblin, was given control of S.H.I.E.L.D. and turned into the organization called H.A.M.M.E.R. The notorious villain soon has control over most law enforcement and the military and that means he is able to force the heroes into hiding. As part of his plan, he formed a group of villains that pretend to be the heroes he forced into hiding. Publicly, those heroes are referred to as “The Avengers” and they have fans who call them “The Dark Avengers.”

The citizens of the Marvel Universe have no idea that their heroes have been replaced. Somehow, they thought giving Norman Osborn control of most law enforcement and the military was a good idea despite his well-known past as a supervillain. While I used to think this sort of thing was far-fetched, considering the last few years, I no longer think this sort of plot is ridiculous.

The Dark Avengers are Bullseye, Moonstone, Daken (Wolverine’s Son), Mac Gargan (the current Venom at the time), Ares (the Greek God of War), the Sentry, and Norman Osborn who uses the moniker “Iron Patriot” while using stolen Iron Man armor.  Out of all these the only hero is the Sentry, who suffers from schizophrenia, severe depression, and other mental illnesses. Normal Osborn manipulates the mental health of the troubled hero into being his nuclear weapon. The Sentry is considered the most powerful person on the planet. As long as Norman Osborn can control him, his team is almost unstoppable. Probably not the best idea to deliberately aggravate the mental illness of a guy with the power of a god. 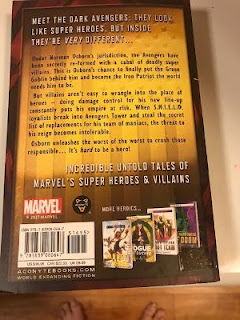 The Dark Avengers In: The Patriot List is set sometime after the X-Men defeated Norman Osborn using public opinion and created their own nation to keep themselves safe from his tyranny. In this novel, members of the defunct S.H.I.E.L.D. have stolen a list from Norman Osborn that proves his Dark Avengers are supervillains and who their replacements would be should any of the current supervillains died. Norman Osborn wants that list back at any cost.

This book is told from multiple perspectives and features plenty of action and violence. Readers are warned that there are torture scenes, scenes where people are eaten alive, and more. There is extensive discussion of mental illness since many of the main characters suffer from various types. Mental illness plays a major role in this story, especially the deterioration of mental health.

Simply put, The Dark Avengers In: The Patriot List by David Guymer is an adult book about bad people doing a lot of bad things. I very much enjoyed this adult tale. I highly recommend it for Marvel fans who are okay with a look from the bad guy’s perspective.