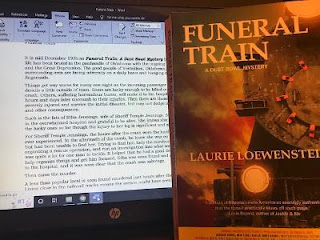 It is mid December 1935 as Funeral Train: A Dust Bowl Mystery by Laurie Loewenstein begins and life has been brutal in the panhandle of Oklahoma with the ongoing Dust Bowl and the Great Depression. The good people of Vermillion, Oklahoma, and the surrounding area are facing adversity on a daily basis and hanging on by their fingernails.

Things get way worse for many one night as the incoming passenger train derails a little outside of town. Some are lucky enough to be killed outright in a crash. Others, suffering horrendous burns, will make it to the hospital only to hours and days later succumb to their injuries. Then there are those that are severely injured and survive the initial disaster, but may not dodge infections and other consequences.

Such is the fate of Etha Jennings, wife of Sheriff Temple Jennings. She wakes in the overwhelmed hospital and grateful to be alive. She knows she is one of the lucky ones so far though the injury to her leg is significant and serious.

For Sheriff Temple Jennings, the hours after the crash were the hardest he has ever experienced. In the aftermath of the crash, he knew she was on the train, but had been unable to find her. Trying to find her, help the survivors by organizing a rescue operation, and run an investigation into what went wrong was quite a lot for one man to tackle. It helped that he had a good deputy to help organize things and get him focused, Etha was soon found and on the way to the hospital, and it was soon clear that the crash was sabotage.

Then came the murder.

A less than popular local is soon found murdered just hours after the crash. Living close to the railroad tracks means the person might have seen who caused the crash. Maybe the killer thought he or she would be exposed? Or maybe something else caused the killing? It is going to be up to Sheriff Jennings, his deputy, and a railroad detective in town investigating the crash, to put the pieces together to figure out the who and why of it all.

This is the second book in the series that began with the very good Death of A Rainmaker: A Dust Bowl Mystery. Those events are occasionally briefly referenced here though one could read this book first if one was so inclined.

A complicated read with multiple plotlines and a cast of characters, Funeral Train: A Dust Bowl Mystery is another excellent historical mystery by Lavine Loewenstein. With few words, the author paints a vivid picture that slams readers into a fully realized fictional world. Much is at work here on multiple levels and the wait for book two has been well worth it. Strongly recommended.

My reading copy came from the publisher with no expectation of a review. The book comes out next Tuesday, 10/4, and is one of many coming out that day.