I find myself in the role of having to confess another full and fair disclosure here. I first met Harry Hunsicker at the recent HHCC conference where I found him to be eminently approachable. Actually, he found me first as he reads my work. Just how cool is that? He graciously offered an ARC of his soon to be released novel and like the salivating dog that I am, I happily said yes. I'm glad I did though I do wish I had been a bit more witty and intelligent in his presence.

This third novel in the series (Still River and The Next Time You Die) finds Lee Henry Oswald and Dallas at the dawn of the new millennium. Lee Henry Oswald is no longer a private investigator; his home is gone, as is his street radar and his moral compass. He's basically just sliding by and trying to avoid everything on every level. Now he tends bar and chases airline stewardess. One in particular, after sleeping with him a second time assumes that they have a relationship. With Lee Henry Oswald living at an extended stay motel near Dallas Love Field she is making a mistake. 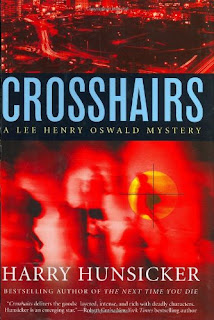 So too does Olson shows up at the local bar expecting Lee Henry to come running to help. Also is one of the few living reminders of what went horribly wrong a few months ago. Olson and Lee Henry both were in a Ranger Unit during the first gulf war. Olson brings news that Mike Baxter, another member of their unit, is dying at the Dallas VA Hospital. He needs to see Lee Henry and thanks to Lee Henry's obnoxious boss, Lee Henry is suddenly free.

Ultimately, with his days numbered to a precious few, Mike wants Lee Henry to find his estranged missing daughter, Susan Baxter, and bring her to him. He wants to talk to her one last time. The last thing Lee Henry wants to do is work again as a P.I. but he owes Mike who very well might be dying because of what happened long ago in the desert. He agrees and then moments later gets handed another case by Anita Nazari, a research doctor in the hospital who desperately wants to protect her daughter and keep the police out of it for reasons of her own.

The result is Lee Henry, who wanted no part of the life again is forced back in via two cases that seem to have nothing in common. As the point of view shifts from the doctor, to the trained assassin known only as The Professor, and to Lee Henry author Harry Hunsicker begins to weave two separate tales that have readers knowing much more than Lee Henry. Even though readers do, as the pages pass, it becomes clear that the readers don't have much of an advantage if any at all.

While another enjoyable read in the series, once again one this reader feels like he has been dropped into the latest situation and somehow has missed a novel in the series. Much is hinted in regards to earlier events which seem to rise to the level of being a complete book in their own right. As such with so much change for Lee Henry as well as the stylistic changes such as use of less humor shifting POV, etc. it takes some time before it begins to feel like a Lee Henry Oswald novel.

And yet, after all the shifts, the rather clichéd idea of the assassins code name being "The Professor" the novel begins to churn along with the expected violence and dark outlook on life one expects from Lee Henry Oswald. Crosshairs,  as the others do in this series, rolls towards a violent confrontation where finally all the players are all identified. The novel delivers on its promise and once again author Harry Hunsicker delivers another dark and engrossing read regarding the man with the less than helpful name.