Reviewing: "Faces Of The Gone" by Brad Parks

Newark, New Jersey has seen senseless killings before. But, the latest is a new low and one made to order for media sensationalism. Four victims, each shot in the head, are left on public display in a vacant lot. The television media, always quick to go with visuals over story depth, quickly tag the victims as “The Ludlow Four.” 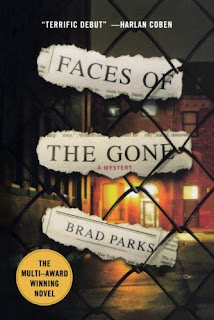 Carter Ross, an investigative reporter with the newspaper Newark Eagle-Examiner, is supposed to take a different tack to the story. Instead of profiling the victims like a couple of other reporters at his newspaper are doing, his editor wants him to take a look at why the killings happened. More of the societal angle with a focus on how society needs to change to prevent such a needless tragedy.

The police are putting out for public consumption that the four recently robbed a local bar and were killed as retaliation. Ross is able to slowly identify all four victims and realizes that they came from varied walks of walk, far different parts of the city, and gradually comes to the realization that the explanation generated by the Police doesn’t make sense. In digging into their backgrounds, Ross not only proves the bar theory wrong, he proves that a theory advanced by the feds doesn’t work either.

The search for the common link between the four murder victims and the truth drives the events of the novel. A novel that occasionally, as all crime/mystery books and a majority of thrillers seem to do these days, shifts into the point of view of the demented mastermind behind all the killings. Something that this reader is very tired of and yet, as long as all the writer advice out there seems to encourage the practice, the annoyance will continue.

Other than those weak moments which border on the clichéd (the name of the evil master mind is laughably named “The Director” for goodness sake) the novel rolls steadily along with a cast of somewhat over the top characters who are allowed to grow far from their stereotyped beginnings. That fact, along with an interesting central character in Carter Ross, plenty of humor and action make this a highly enjoyable debut mystery. The ending is a little too rushed and our hero is easily saved by outside forces and yet the overall read is good one.


Material provided by the good folks of the Plano, Texas Public Library System.

Nice review, Kevin and I, too, agree that slipping into the madman's head (often in first person when the novel is in third or vice versa) is fairly annoying to me, too. How do you feel about the issue of going into the victim's POV, on the other hand? I've noticed that in a lot of suspense/thrillers, too. Especially ladies breathing their last as they are burned up/buried alive/tied to a tree to freeze to death/garrotted, etc.

Thanks for another excellent and all-encompassing review, and I especially like your new governmentally-correct disclaimer as to how you came by the book!

Thank you....I agree. I don't care for it at all. For me, it is a rather cheap trick used to build suspense that fails while doing nothing more than padding page counts.