Reviewing: The Caretaker of Lorne Field by Dave Zeltserman 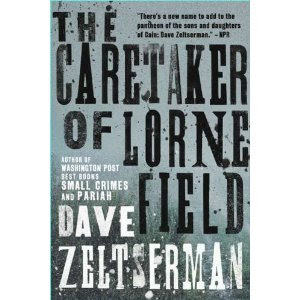 There was a time when the position as the Caretaker of Lorne Field was a high honor. A position of respect that came with a small cottage, a decent salary and freebies given by the local residents out of appreciation for the very difficult job held by the Durkin family. After all, only due to the diligent weeding by the Caretaker were the relentless Aukowie held back from rampaging across the world.

But 300 years have passed and in these modern times, few have any respect for the position, the family, or the ancient contract. Nobody but the current caretaker, Jack Durkin, take the Aukowie threat seriously. Not even members of his own family believe he does something that matters. Proving the validity of the threat is difficult due to the requirements of the ancient contract. Requirements that Jack for justifiable reasons is very loathe to break. As the evidence of a lack of threat and various calamities mount against him, Jack Durkin, finds himself increasingly isolated and questioning his own sanity while he struggles to protect the world in The Caretaker of Lorne Field.

Readers familiar with Mr. Zeltserman’s work will recognize themes that he has hit before in other books. His stylized version of a redemptive noir is present in this novel where every decision Jack Durkin makes backfires against him worsening the divides inside and outside his family. Those decisions and the wisdom of them are also a key part of the author’s often repeated theme questioning the sanity of the primary character. In this case, the division between sanity and insanity is stark. Are the plants the monsters that will take over the world if not plucked from the earth as soon as they sprout like Jack believes? Or, as many others suggest including his own family members, are the plants nothing more that harmless weeds that play a role in his delusions?

Mutually exclusive versions of reality frame events throughout the 237 page book that shifts in point of view from Jack, to his long suffering wife, to others. Along with touching on the themes of discord between brothers, obligations to family and community, respect for others and the themes noted above among others, the author weaves a compelling tale from start to end in The Caretaker of Lorne Field. There are reasons for everything no matter what it is in this fast moving tale that is marketed as horror but really is a mystery with just a touch of horror.

The Caretaker Of Lorne Field

Material provided by the good folks of the Plano, Texas Public Library System. These are tough times for libraries so please do your part to support your local library system any way you can.

Since the direct link deal by click on the cover to go to Amazon is not working, and their customer service seems incapable of understanding the problem or plain English, please click through the link below to order this title or anything else. Thank you!