THE INNOCENT MRS. DUFF (1946)
by Elisabeth Sanxay Holding
Reviewed by Barry Ergang
Discussions about mystery/suspense fiction often debate whether certain stories are plot-driven or character-driven. I take the first to signify a tale in which plot is something extraneous that happens to the characters, imposed from without; the second to signify a tale in which the plot develops from the characters populating it, who themselves create the situations they become entangled in. I don't find one type necessarily better than the other. The result, for better or worse, depends on any given author's integration of the multitude of elements that make up the storytelling process. That said, let me highly recommend as a first-rate example of the character-driven story The Innocent Mrs. Duff by Elisabeth Sanxay Holding.

The story is told from the point of view of the priggish, class-conscious Jacob Duff, a man in his forties who has recently remarried following the death of his first wife Helen, the mother of his young son Jay. Regina (“Reggie”) Duff, née Riordan, is twenty-one, beautiful, caring, outgoing and, in Jacob's view, shallow and stupid. A year into the marriage, he has lost interest in her and ponders divorce. It becomes apparent to the reader early on that Duff himself, with his narrow snobbery, his selfish insistence on the way things ought to be, and his unwillingness to communicate with his wife to effect understanding and compromise, is the shallow one. Fourteen pounds overweight, he vows to lose the excess poundage by exercising and dieting—but he begins to drink heavily, frequently getting sick. After each drinking bout, he swears he's going to cut down or quit, but finds himself unable to, rationalizing the need for alcohol every time.


As the story deepens, his own idiosyncrasies create worsening problems for him which he blames on Regina and others, ultimately leading to a tragedy of his own making. Holding skillfully and subtly develops her drama and its personae in a clear prose style—without resorting to the kind of analysis and psycho-babble one is more likely to find in current “psychological suspense” stories. Instead, the reader observes Duff in action and interaction, is privy to his thoughts, and can thus indulge in his own analysis if he wishes to.


In a letter to Hamish Hamilton, his British publisher, Raymond Chandler wrote: “Does anybody in England publish Elisabeth Sanxay Holding? For my money she's the top suspense writer of them all. She doesn't pour it on and make you feel irritated. Her characters are wonderful; and she has a sort of inner calm which I find very attractive. I recommend for your attention, if you have not read them, Net of Cobwebs, The Innocent Mrs. Duff, The Blank Wall.”


The edition I have, which also contains The Blank Wall, is published by Academy Chicago and contains a cover blurb from Anthony Boucher: “For subtlety, realistic conviction, incredible economy, she's in a class by herself.”

*****
Formerly the Managing Editor of Futures Mystery Anthology Magazine and First Senior Editor of Mysterical-E, winner of the Short Mystery Fiction Society’s 2007 Derringer Award in the Flash Fiction category, Barry Ergang’s written work has appeared in numerous publications, print and electronic. For links to material available online, and fiction available for e-readers, see Barry’s webpages. Remember, too, that he has books from his personal collection for sale at http://barryergangbooksforsale.yolasite.com/  He'll contribute 20% of the purchase price of the books to our fund, so please have a look at his lists, which have recently been added to in several categories. 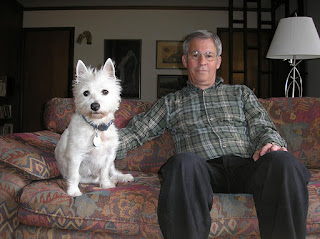