Friday means Friday’s Forgotten Books with Patti Abbott. The list will be here later today. In the meantime, please welcome back  Patrick Ohl…

There is a legend about three powerful sorcerers who once lived in the Nagano prefecture. They were known as Tsunedahime, Jiraiya, and Orochimaru, and have been the subjects of numerous legends, plays … and tattoos. Akimitsu Takagi’s The Tattoo Murder Case involves the story of three such tattoos. 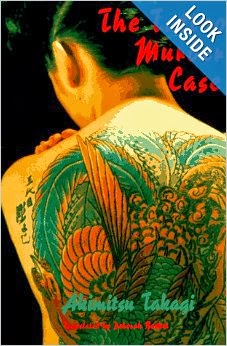 Mysteries in Japan have evolved in a completely different direction than those in the Anglo-Saxon world, at least from what I can gather. I don’t know Japanese, nor am I too familiar with the culture, but the translations we get into English only seem to confirm the idea. It seems that in Japan, the “game” is still highly respected—you give the readers all the clues and you tell a story instead of wallowing in angst and self-pity. In other words, a Japanese detective novel is about a mystery, and not about telling readers how awful society is, vaguely disguising the lecture as a mystery by throwing in a corpse or two and some violence.

So as you can probably tell, I eagerly looked forward to revisiting the Japanese detective story, finally settling on The Tattoo Murder Case. This particular book was originally published in 1948, and was published in English by Soho Press. And much to my delight, I discovered that it involved a locked-room mystery!

In itself, that posed a difficulty, because Japanese-style homes do not lend themselves very well to the locked-room mystery. Takagi finds a way around this, however, and an explanation is given in full. The situation is an intriguing one: a woman, beautifully tattooed, is found in her locked bathroom, murdered. More specifically, her head and limbs are found, because some maniac has carted off the tattooed torso for himself!!!

And thus the plot is set into motion. Steeped in the world of that Japanese art tattoo, The Tattoo Murder Case is a fascinating read. You really get a lot of information on post-WWII Japan, with American GI’s roaming the streets, side-by-side with Japanese citizens who are still getting used to the Emperor’s announcement that he is not, after all, a God. Tattoos are still technically illegal, and the police might choose any time to crack down on them, so a sense of shadiness is embedded right into the plot. When the author talks about these tattoos and the appreciation societies and the mad collectors who literally will decorate their homes with tattooed human skins… the book is at its most fascinating.

There’s also a lot of neat touches of social commentary, all done quite subtly. I’m sort of surprised you could get away with publishing this kind of stuff in 1948… although then again, this was Japan and there was a fifty-year delay in getting it published in the States. Some of this material is rather sickening in fact, such as one point in the story in which several prostitutes are questioned, and one of them is a mere fourteen years old. Then there’s the nearly-sexual fetish one character has for tattoos… And the most disturbingly beautiful art collection I’ve ever read about!

Unfortunately, the plot doesn’t quite live up to its promise. The situation is intriguing and there are several moments with seemingly-supernatural touches. All of this is excellent build-up to a rather anticlimactic finish. Most of the plot’s secrets become fairly obvious by the end, with only one or two surprises left. One of these surprises is how the locked-room trick was worked… but to be honest, I’ve never been a fan of such tricks. All the variations work on the same principle. With merely a few memorably ingenious exceptions, they all seem to boil down to one major mish-mash of a category of locked-room solutions. It’s very underwhelming to say the least. Instead of a gasp of astonishment—“How could I have been so silly as to not see it?”  my reactions was more of an: “Oh, so it was just this type of solution all over again…”

There’s one other major problem with the book, and that is the translation. It’s not a bad translation, let me clear that up, and I’m not blaming anyone here, least of all translator Deborah Boehm. In fact I’d love to see more of this sort of stuff translated. However, there is a lot of explanatory material in the book. Some of it makes sense, but much of it seems out of place—something any Japanese reader at the time would not have needed to be told. That information seems like it was added to help explain things to the Western reader, but to be honest, they tend to interrupt narrative flow. That’s why I prefer the footnote approach personally.

Still, The Tattoo Murder Case is an interesting book overall. It reads like a Japanese S. S. Van Dine without Philo Vance. It’s just as tricky and ingenious… and unfortunately, most of it is just as obvious. The book’s title even fits the pattern of Van Dine’s titles: The [Six Letter Word] Murder Case. It’s a tricky, complex, and delightful read, and it’s pretty well written too… it just doesn’t get that extra push of ingenuity to make it a classic like The Tokyo Zodiac Murders.

Notes: Unfortunately, the publisher seems to have missed out on the whole this-is-a-puzzle-mystery thing. The reviews they choose to quote describe the book in distinctly modern terms: “chilling”, “kinky”, a tale of voyeurism “down the charred streets of bombed-out Tokyo” involving “sexual obsession and perversity”. One review even calls the locked-room mystery one that will outdo John Dickinson Carr!!! The truth is, this is an excellent fair-play puzzle mystery that should be enjoyed by fans of the Golden Age mystery despite its flaws. Don’t be fooled by the rather off-putting reviews.

Patrick Ohl ©2014
Patrick Ohl is a 20-year old Canadian crime fiction aficionado who enjoys hobbies such as taxidermy and runs a dilapidated motel in the middle of nowhere alongside his crazed mother. He enjoys relaxing in his subterranean evil lair while watching his favourite hockey team, the Toronto Maple Leafs, and will occasionally make chicken chow mein to die for. His life is accompanied by a soundtrack composed by John Williams, and James Earl Jones provides occasional voice-overs.

I read this a few years ago and remember really liking it. My copy was messed up, though. The last 50 pages or so were all present, but out of order, so I had to keep flipping around!