Back in 2007 one of the first reviews Barry Ergang contributed here was on The Last Best Hope by Ed McBain. Like a lot of the early reviews on this blog eight years ago Barry’s review did not get the visibility it should have as I was stumbling around here in those early days of blogging and didn’t know what I was doing. It got a few more looks in 2011.  With Ed McBain day in two  weeks on Patti Abbott’s blog it seemed a very good time to run this one again. After you read Barry’s work, make sure you head over to Todd Mason’s Sweet Freedom Blog for the rest of the FFB reading suggestions today.


Jill Lawton comes to attorney Matthew Hope's law office in Calusa, Florida to get a divorce—with alimony—from her long-gone husband Jack. Nine months earlier, Jack had gone north, ostensibly in search of freelance graphic design work, and she has not heard from him since. Jill hopes to invoke the Enoch Arden Law, but Matthew explains that not enough time has passed for this to apply, and that they'll have to find Jack and serve him with the divorce papers.

It's not long thereafter that a man's body is found on a beach in Calusa, the face gone from a shotgun blast. A driver's license and Visa card in the man's pockets suggest he's Jack Lawton. But when Jill is summoned to positively identify the body, she instantly determines from the absence of a miniscule blue dot on his Adam's apple that the man is not her husband.

Matthew puts a firm of private investigators on the case, and on his own phones a precinct in the city where Jack was last known to have been. The city is unnamed; the precinct is the 87th; the detective Matthew talks to is Steve Carella.

Thus McBain melds two series and the sleuths therefrom, each working in different locations on the same case.

As the body count increases and surprises unfold, McBain with the skill his fans know and love conveys the story's past and present from different angles and viewpoints, switching among the various investigators and multiple villains. The reader is taken into the heads of the characters, all of whom are believably fleshed-out, and comes to know them from their conversations with others and their internal monologues—another McBain trademark.

The Last Best Hope never lets up—it's a superb example of a "page-turner"—as characters and events converge in a wild climax tense with excitement but leavened with humor situational, coincidental, and authorial. The lyric from a song in a James Bond movie aptly sums up Ed McBain: "Nobody does it better."

For more on this novel and mysteries in general surf to http://tinyurl.com/2ny8gv 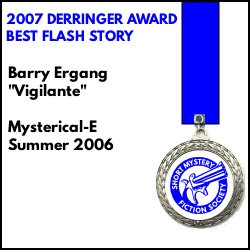 Winner of the Short Mystery Fiction Society’s 2007 Derringer Award in the Flash Fiction category, Barry Ergang’s written work has appeared in numerous publications, print and electronic. Some of it is available at Amazon and at Smashwords. His website is http://www.writetrack.yolasite.com/.
Posted by Kevin R. Tipple at 12:30 AM

I picked The Last Best Hope for Patti's Ed McBain Day, and am reading it now. As such, I'm tempted to pass on Barry's review until I've written my own. Then, of course, I'll be compelled to see how his take on the novel compares with mine. It's been decades since I last read an 87th Precinct novel, or anything else by McBain/Hunter, and I'll say right now I'm enjoying the reunion. Thanks for the post, Kevin.

I look forward to reading your perspective on the book, Mathew, on McBain day.

As will I, Mathew. And thank you for coming by here.