After watching the success of anthologies from other writers groups have had in recent months, the members of the Short Mystery Fiction Society embarked on their own anthology. Over three hundred entries were whittled down to the final nineteen tales showcased in the book. Variety is the key in Flash And Bang: A Short Mystery Fiction Society Anthology. Edited by J. Alan Hartman, the read features tales that cross time as well as space in terms of geographic locations.

After a short introduction by current SMFS President Jan Christensen, it is on to the stories. Herschel Cozine leads things off with his flash tale “The Perfect Crime.”  Imagine, if you will, all of the great fictional detectives gathered together to discuss one case.

Bobbie A. Chukran comes next with “The Conflagration at the Nameless Cotton Gin.” The title easily 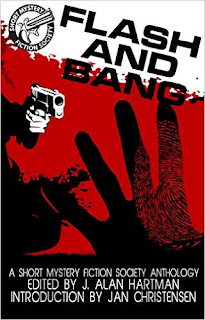 enough explains what happened, but the why of the event is a bit more complicated.

“Murder on Elm Street” by Su Kopil comes next with a tale where a power outage on a brutally cold night drives nearby neighbors to the one house that has power. It is fitting on a night such as this that it is time for a twenty-two year old cold case to be finally solved.

P. A. Devoe takes readers back in time to a China of long ago in “Fireworks (From Judge Lu’s Ming Dynasty Case Files)". During the annual celebration of the monk Li Tian and his invention of fireworks, Lu is informed there has been a death at the nearby shop of the Lie brothers out on Xiao Di Road. The accident requires the immediate attention and investigation by Judge Lu.

Receiving unwanted attention from a bag lady is not a good thing. Even if she does give good advice in “The Bag Lady” by Laurie Stevens.

The chaos of a rapidly moving wildfire might be the perfect time to murder someone and get away with it. Tim Wohlforth examines the possibilities in “Sierra Noir.”

The Vikings have harnessed steam power in this alternative history mystery titled “Thor’s Breath” by Suzanne Berube Rorhus. It is the year of the Christian Lord 627, and this small area of coastal Norway has one mechanical healer by the name of Hamarr. He is possession of a magical new material from the Far East that has wonderfully intriguing possibilities if it can be harnessed.

Debbie and her companion, Arthur, have a job to do at Detweiller Industries. “Arthur” by Sandra Murphy is a clever and fun story that takes a little while to figure out.

The morning after is rough for Keith in “Fractured Memories” by Julie Tollefson. Andrea’s latest Fourth of July party was a real blast and Keith is paying the price. Somebody else paid a far bigger price due to last night’s events in this complicated tale.

A hostage situation that is gradually getting worse is at work in “Don’t Let the Cop into the House” by O’Neil De Noux. The small brick home in Lakeview was flooded during Katrina and was put back together. Somehow the police now have to save homeowner Mike Agrippa, who is drowning in his own way.

When men want protection money the elderly grandmother has few choices in “Rosie’s Choice” by John M. Floyd. These are not the kind of customers she needs in the store the day before Independence Day.

Readers again go back in time in the next story. “Don’t Be Cruel” by Joanne Lucas takes readers to June 1957 in Fresno, California where Homicide Detective Frank Ransom has a new case. Ransom thinks of movies quite a lot and sees the world as a movie scenario. Before he can make it all fade to black he needs to figure out who killed the woman in the diner and why.

Brigid Morgan is the client and she claims somebody is blackmailing her over some very adult pictures that were taken 15 years ago. As the new CEO of an internet search engine company she knows that once she starts paying it will never end in “A Simple Job” by Andrew MacRae. She has a plan and first she needs the identity of the blackmailer.

Twenty years later, Carly is back to the Quick ‘N Slow Diner located close to the nearby cabins. As a child, she came there with her family when they rented out one of the cabins. In trying to find herself, Carly unwittingly finds much more about others in “Beautiful Killer” by Judy Penz Sheluk.

Being a hooker is a tough job, but finding your client dead in a bed is a real problem. So too is the female already in the room in “The Fruit of Thy Loins” by Albert Tucher. Good thing Diana can fight and knows at least one good cop.

The small town of Sentry, Texas is the location for “The Raymond Chandler Con” by Earl Staggs. Murder is not supposed to happen in a small town such as Sentry, which is why Police Chief Harry Phillips left the job in Dallas and came here. The murder victim’s best friend, Martha Robinson, has no police experience, but she reads a lot of mysteries. She has an idea how to solve the case with or without Harry’s help.

No one ever takes notice of the janitor as he or she goes about doing a very necessary job. The person doing the cleaning blends into the background. Such is the case here in “The Wrong Girl” by Barb Goffman, where the janitor overhears a plot by three teens at an elite private school.

It has been three weeks, the ransom was paid quite some time ago, and the child still has not been returned in “Silent Measures” by BV Lawson. Scott Drayco, a private consultant, has been brought in to help find the boy who vanished from his boarding school.

A tale translated by Willem Verhulst is the final entry in the anthology. “A Day Like No Other” by Walter A. P. Soethoudt follows a Lieutenant Belloc as he goes through his day in Antwerp while thinking about the past and the many changes in the city.

Short author bios for the contributors bring the read to a close.

While not every story in the book is an actual obvious mystery, all of the stories have a mystery at the core. Some are more mysteries of the mind where characters think about their past actions and the resulting ramifications, while other tales are very much in the moment where one can smell the blood on the floor and the cordite in the air. Filled with interesting tales of complicated characters dealing with events in their lives, Flash And Bang: A Short Mystery Fiction Society Anthology brings a pleasant read by way of a variety of stories. As in other anthologies, each reader will have his or her own personal favorites among the 170 pages, but all the tales presented are good ones in their own way.

While I am a writer as well as a member of the Short Mystery Fiction Society I did not submit a story for this anthology. Material supplied by the publisher in exchange for my objective review.


Kevin, I'm working my way through the stories in the Flash and Bang anthology and enjoying every one. It's a terrific collection from some of the best short mystery writers around.