Saturdays With Kaye: Night and Day by Iris Johansen

Night and Day by Iris Johansen 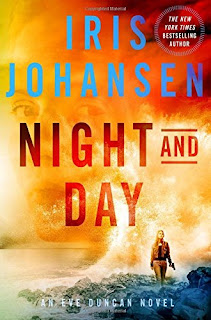 From the outset, the reader is tossed into the ongoing action, which is awash in characters. I got the feeling I was late to the party. Because of that, I’d highly recommend reading the first two in this series. This is a paranormal mystery featuring Eve Duncan, a likeable character who is accompanied by an odd assortment of eccentrics and misfits. All the characters are fascinating and fun to read about.

An eleven-year-old girl, Cara, is the center of the initial maelstrom. She was taken in by Eve to shield her from some evil people who want her dead. Little Cara has been through a lot in her short life. On another front, Eva’s older adopted daughter Jane hold the key to finding a golden treasure through a mystical connection with a slave turned actress who escaped Vesuvius, Cira. This gold is the center of the rest of the activity.

Between Mexican cartel bosses and Russian mafia bosses, the little band on the edge of the lake at Gaelkar Scotland battles through impossible odds to fend off the evil doers and survive. There’s a sweet relationship between the young Cara and the somewhat older Jock, a trained killer who is fiercely protective of and dazzled by her. So much so that she is able to convince him that night is day and day is night.

You’ll have fun on this wild ride!


Reviewed by Kaye George, Author of  Death on the Trek, for Suspense Magazine