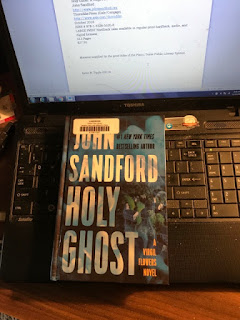 The plan was simple and should have saved Wheatfield, Minnesota.  A town of 700 people, Wheatfield was suffering the slow death that many small towns all across America are facing every day. That was until the floating image of the Virgin Mary appeared at a local church. Unlike many such apparitions, this one was recorded by numerous cellphones and shared on social media giving it immediate legitimacy. The tourist industry boomed as word spread and locals cashed in on the bonanza.

Until the shootings started.

The faithful are still coming, but that will change if the shootings continue. And the shooter just might kill somebody. Late spring in Minnesota and Virgil has the case down in Wheatfield, an hour away from his home in Mankato, Minnesota. Virgil knows the sniper is probably some sort of nut case and has had a long history of dealing with nut cases in his career as an agent of the Bureau of Criminal Apprehension.

While everyone in town knows Virgil is a cop investigating the sniper case, the sniper is undeterred. Throw in a murder, which may or may not be separate from the sniper shootings, and things just get interesting in a hurry.

Holy Ghost: A Virgil Flowers Novel is a fairly straightforward action novel. The book is mainly about the hunt for the sniper with a couple of interesting minor plot threads thrown in for fun. Like all series, it would have been a good idea to read the earlier books in this series to get all the inside jokes. However, if you have not read the others, Holy Ghost: A Virgil Flowers Novel is a pretty good one to start with if you are new to the series about “that fuc*ing Flowers.”