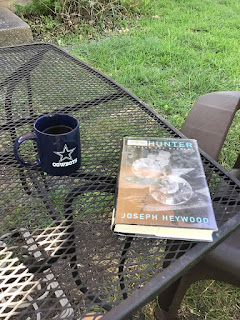 Ice Hunter: A Woods Cop Mystery by Joseph Heywood begins a series built around Grady Service. A former marine who served in Vietnam, these days he is a conservation officer working in Michigan’s Upper Peninsula. Specifically, an area known as the “Mosquito Tract” that his father also patrolled before he was killed. Like his father before him, the land and the creatures are everything to him, and he does not play well with others who do not have a moral code to live by. A complicated childhood has led to a complicated life in many ways.

In addition to the usual events a conservation officer has to deal with as he protects the land and all living things, he has to deal with strange things that are going on in the woods. Fires are being ignited by an arsonist who seems very careful to do so in some sort of controlled burn. The burns seem to be orchestrated to clear some small areas for an unknown reason. Then there is the unknown helicopter occasionally seen doing something in what seems to be some sort of grid like search pattern. Not to mention the fact somebody wants him to butt out of something and is making that point very violently. He has an idea what might have stirred things up, but with so much going on it is hard to tell.

Ice Hunter: A Woods Cop Mystery by Joseph Heywood is a good read though it takes quite a bit to get going. Originally published in 2001, it does not follow the current fad of starting with an action scene before doing a sort of informative flashback as seems to be required in every book published now. There is a lot of setting the stage as this read begins and the character as well as those in his life are slowly revealed. 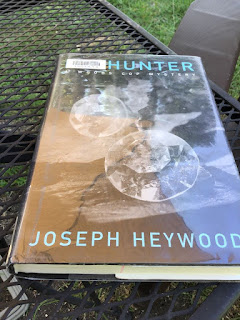 In the end, Ice Hunter: A Woods Cop Mystery by Joseph Heywood is worth sticking with it as the multiple storylines coalesce into a high powered and intense finish. Convoluted and chaotic, the reader is shot through the rapids to find oneself slowly floating gently in calmer waters downstream in the wide bend of the river very much shaken and stirred as well as appreciative of the fact that was one heck of a ride.

Because of Aubrey Hamilton’s review from last March, I got this from the library just before they closed their doors back in mid-March. While they have most of the rest of the series, they do not have book two. I have put in an order for that and hope to hear something, one way or another, soon.

Although I follow more series than I can actually keep up with, this series is one that I make a point of reading. The plots are frequently too convoluted to follow easily but I thoroughly enjoy the characters and the settings. His second series about Lute Bapcat I have not enjoyed as much.

It was a hard read for me for that reason plot wise. I have not read the other series. Not sure if I have the second book in this series here from the library or not. I may have. I have over 100 print library books here as they took the check out limit off thanks to Covid and the closures here.

Not to mention the print copies from publishers, authors, etc and all the eBooks (over 2k) I have.