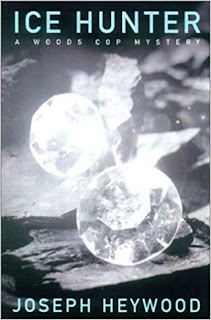 The Ice Hunter by Joseph Heywood (Lyons Press, 2001) is the first book in the Woods Cop series, which now has 11 full-length novels and two collections of short stories. Grady Service is a state Conservation Officer in the Upper Peninsula of Michigan, leading a solitary life primarily devoted to protecting an old-growth tract known as the Mosquito. Grady is an intense personality, former Marine, and recognized expert tracker. Grady’s father was also a respected Conservation Officer and Grady feels compelled to uphold the family’s reputation as formidable protectors of nature. The current state administration’s emphasis on improving the local economy, regardless of the impact on the environment, has Grady more worried than usual about the welfare of the Mosquito, which is full of potentially valuable timber.

In addition, the patriarch of a large family with criminous tendencies and frequent citations for poaching is about to be released from prison on parole. Grady helped put him away to begin with and has good reason to be concerned about the family’s urge for revenge. He’s also well aware that the family will be up to no good again as soon as the father gets his bearings.

Grady receives reports of a helicopter hovering over the wilderness tract one day and he can find no government agency that admits to flying in the area. Then he encounters a stranger in the same part of his territory, who was equivocal about his reasons for being there. While the people he tells about these two incidents don’t consider them significant, Grady has an uneasy feeling that they are considerably more important than anyone understands. When a member of the aforementioned crime family is found dead, clearly a homicide, Grady’s vague worries find a focus and he is sure all of these odd incidents are related.

An unexpected but believable motive, a compelling depiction of the woodlands, and striking characters make this book a noteworthy read. For readers of traditional mysteries, especially fans of mysteries set in the outdoors such as the Anna Pigeon series by Nevada Barr and the Joe Pickett series by C.J. Box.