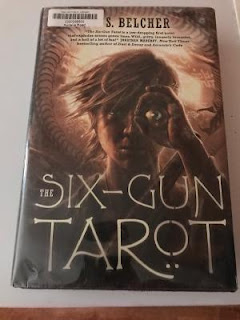 The Six-Gun Tarot by R.S. Belcher is the debut novel for this author and the first book of a planned series. It is a book that is considered a “weird western.”  Those are books where dark fantasy, occult, and various other paranormal type elements are part of the tale. That is certainly the case here as the read has fantasy, occult, and horror elements in this tale set in the old west. Because it is set in that time, some of the language used in the story is reflective of that period and would not be acceptable in our current society.

Deep in the desert in 1869 Nevada, there sits the town of Golgatha. It is a place that attracts the weird, the lost the outcast, and those who like to forget their past. While there are many unique characters in this town, there are three characters, heroes if you will, that the story primarily revolves around as it unfolds.

The Sherriff is a man who has been hung until dead three times. The mark of the noose is still vivid around his neck. Some say he is dead now and others say he can never fully die. His Deputy is “Mutt” and so named in reference to the fact that he is a half breed son of Coyote, the Native American Trickster God. Mutt is half man and half coyote and has the ability to transform between the two forms. The third is a young boy who is on the run from his past. In the present, he guards a magical eye that used to belong to his father before he died.

These unique heroes must combine forces to battle a coming evil that threatens to end the world. If the city of Golgotha falls, the world will not be far behind it.

The Six-Gun Tarot by R.S. Belcher combines action, humor, mystery, and more into a really enjoyable read. One of my favorite aspects of the book is how it really pulled me into that world. There are a lot of throw away lines between characters that reference lots of different events that show these characters have been working together and dealing with weird things for some time now.  For example, there is a debate between characters if what is going on could be caused by Rat People and as things progress, they start arguing whether there really are rat people or if other folks are faking things. It is funny when you read it in the book though it may not appear that way here.

The next book in the series is The Shotgun Arcana and I am on hold through the library for that one and the following book, The Queen of Swords.


My reading copy came to me from the Audelia Road Branch of the Dallas Public Library System.