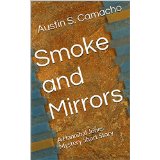 Again this week things have gotten away from me so I am running a repeat of a previous short story review. In this case, my review from January 2016 of Smoke and Mirrors: A Hannibal Jones Mystery Short Story by Austin S. Camacho. Unfortunately, it also seems to be out of print these days.

A Hannibal Jones short story is a treat and Smoke and Mirrors proves to be no exception. The wildfires in southern California have done a real number on the area. Hannibal Jones knows that after seeing the destruction from the air as his plane headed into San Diego.

What he didn’t know was arson was apparently involved. According to his friend, Mike Weaver, at least one fire was arson and that led to a death which is why he paid for private investigator Hannibal Jones to fly out from Washington. The two men have known each other for years and Weaver had no one else to turn too when local law enforcement turned him down. While Weaver things it was murder, local cops say it was just an accident thanks to shifting winds.

That would not explain why Gina Young died in a fire so intense that there is nothing left of her body. That wind issue would also not explain why Weaver found traces of accelerant in the debris. It also does not explain how her live in housekeeper, Elaine Chavez, escaped a fire that was going before the rest of the neighborhood evacuated.  Nearly 1800 families lost everything in nearly seven counties so Weaver’s questions about one death are being lost in the aftermath.

With Weaver guiding him, Hannibal works the case in Smoke and Mirrors. A case that stretches far and wide with a number of suspects and witnesses. The result is a fast moving short story and another very good tale featuring Hannibal Jones.

According to Amazon, I “purchased” this read back in November. I don’t know now if I did by way of funds in my Amazon Associate account or I got this by way of a publicized freebie offer by the author.

A new author and a new character for me.

I very much like his stuff. Just way, way, way behind in my reading.