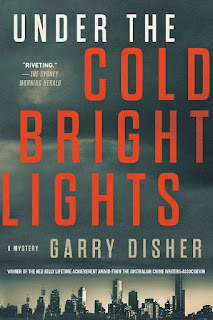 Garry Disher is one of my favorite contemporary authors. He has published over 50 widely translated books in a range of genres: crime thrillers, literary novels, short-story collections, YA/children’s novels, and writers’ handbooks. His awards include the Ned Kelly Lifetime Achievement Award in 2018; the Ned Kelly Award for Crime Fiction in 2007, 2010, and 2021; the Crime Novel of the Year, Germany in 2020; and German Crime Fiction Award in 2002 and 2016.

In Under the Cold Bright Lights (Soho Crime, 2019), Alan Auhl is a retired Homicide detective in Melbourne, living in a large three-story house inherited from his parents. His daughter lives there, his estranged wife comes and goes, and he rents rooms to students and women transitioning out of shelters and abusive domestic situations.

The Homicide department has called him back to work in a newly formed Cold Case unit, where his younger colleagues make ageist jokes. He ignores them and plods placidly along, using 30 years of experience to review cases with a fresh eye and closing one here and there. A case thought closed re-opens suddenly with the discovery of a long-dead body who turns out to be the expected perpetrator of a murder. Instead, apparently both Mary Peart and Robert Shirlow were killed at the same time, and his body hidden to make it seem he was Mary’s killer. In the meantime, the daughters of a man whose cause of death was never established make their annual call to Auhl to ask him once again to try to find their father’s killer. His supervisor calls him in to tell him that a doctor who Auhl believed killed his first two wives is now claiming that his third wife is trying to kill him. And at home, his current tenant escaping from domestic abuse is fighting her wealthier husband who wants permanent custody of their daughter.

Tightly plotted and propulsive police procedural with a twist. Auhl takes all four cases to logical if surprising solutions. In at least one of them, a really surprising solution. A stand-alone unfortunately, as Auhl could easily grow on me.