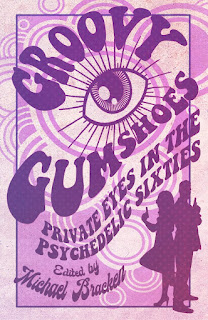 Please welcome author Andrew Welsh-Huggins to the blog today. Like Tom Milani,  Steve Liskow, and Mark Troy, Andre Welsh-Huggins has a short story in the upcoming anthology, Groovy Gumshoes: Private Eyes In The Psychedelic Sixties. Edited by Michael Bracken, the book is scheduled to come out Monday, April 11th, from Down & Out Books.

Setting out to write a private eye story set in the 1960s, I felt I had all the necessary elements. What I lacked at first was the spark to bring them to life.

For starters, I possessed actual memories. Born in 1961, I was around for a decent chunk of the decade. I remember images of soldiers on TV; being told by an elementary school teacher in the wake of Robert F. Kennedy’s assassination that even making the shape of a gun with my fingers was forbidden (talk about more innocent times); and my parents awakening me to watch the first man on the moon. I also have fond memories of tearing around town on my bike with its banana seat, “cooking” up plastic bugs with a Mattel Thingmaker, and building snowmen after one of that era’s epic snowfalls.

Next, I had a location. Nowadays, I set most of my crime fiction in and around my adopted home of Columbus, Ohio. But I knew right away I wanted a story that played out in the Finger Lakes, where I largely grew up after my father took a job in Rochester. I went so far as to set a scene in tiny Lima—“The Crossroads of Western New York”—the town along Route 20 where we lived and I went to school. Small, quiet and safe, Lima was the sort of place you could walk half a mile to the library at age six and hardly anyone batted an eye. (My parents didn’t, anyway). As a bonus, the tavern where my fictional private eye is hired—the American Hotel—still exists, practically unchanged.

Finally, I had a character. I named my gumshoe Jerry Hollister, a nod to a formative book series, The Happy Hollisters, that I devoured as a child. The books were published by the Stratemeyer Syndicate, which also put out Nancy Drew and the Hardy Boys, but were marketed to a slightly younger set of readers. They featured a family of five kids living in fictional “Shoreham,” who used wit and pluck to solve mysteries with hardly any of the constraints on exploration that we’re used to in these days of helicopter parenting. Unlike many Stratemeyer books, The Happy Hollisters were all written by one person, Andrew Svenson, who wrote under the pseudonym Jerry West—hence Jerry Hollister. (Happily, these books are back in print thanks to the efforts of Svenson’s grandson.) The name in place, I made my character a Vietnam vet and ex-Rochester cop who takes the private route after becoming disillusioned with the police force.

So: I had memories of the 1960s; a location; and a character. What I lacked was a plot.

Eventually, a dislocated memory started me off. It involved a family visit to the house of someone my parents knew. A young couple—possibly teachers—who lived in the country and cultivated a large garden. I’m pretty sure they kept chickens, and possibly rabbits. Crucially, I recalled the husband—boyfriend?—sporting a decade-appropriate long beard. And that’s about it. Both my parents have passed and so the specifics are forever lost. But perhaps just as well. That one memory was enough to trigger an idea for a story that finds my private eye searching for a young wife and mother who absconds with a ganga-smoking guru into the hills overlooking one of the Finger Lakes.

And so Jerry Hollister was born, thanks to the quirk of fate that transplanted my midwestern parents to western New York State. Better yet, he appears for the first time in my short story, "Building Something Better," in the upcoming Groovy Gumshoes anthology. One story into Hollister's career, I kind of like the guy. Hanging around with him in my head, it makes me miss those days. It was nice to go back for a while. 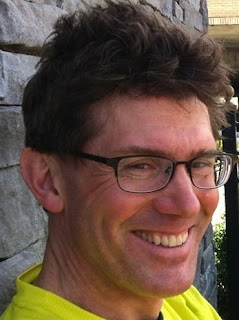 Andrew Welsh-Huggins is the author of the Andy Hayes private eye series, featuring a former Ohio State and Cleveland Browns quarterback turned investigator, and the editor of the anthology Columbus Noir. Andrew's nonfiction book, No Winners Here Tonight, is the definitive history of the death penalty in Ohio. Andrew's short mystery fiction has appeared in Ellery Queen Mystery Magazine, Mystery Magazine, Mystery Tribune, the 2021 Bouchercon anthology This Time For Sure, and other magazines and anthologies. His standalone suspense thriller, The End Of The Road, is due out in 2023 from Mysterious Press. Learn more at https://www.andrewwelshhuggins.com/
Posted by Kevin R. Tipple at 1:00 AM