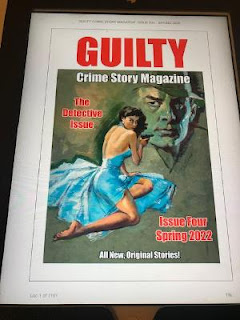 Guilty Crime Story Magazine: Issue 4, Spring 2022 is billed as The Detective Issue and opens with “Poor Little Rich Man: A Sam Harrigan Story” by Editor Brandon Barrows. P.I. Sam Harrigan is awakened in his office by somebody at his door. That man was Mark Cole who as an actor. Now he is dead having made it his last act on stage to appear at the door of his office. Why and who killed him are two questions that private investigator Sam Harrigan intends to answer.

He used to be a detective who did some things that crossed the line. Some of those things pushed him out of the job. There is still time to atone for a thing he should have handled long ago in “Badge” by Michael Grimala.

Solving the puzzle was always the attraction for Dick which is why he left the police force and opened his own agency. It is a one-person agency as he prefers working alone to connect the dots. In “See The Signs” by Craig Terlson, he is looking for a missing kid. Simon seems to be a bit young to be a runaway. The mom, Mrs. Jackson, wants no police involvement. That is the first of several oddities with this one.

Harry McLean has had enough of Caleb as “Caleb’s Cannon” by M.E. Proctor begins. The pay for information dance is familiar, but Harry has had enough. It has been a rough few days in the heat of South-East Texas on a stakeout and now a new case is in his lap due to a recent incident. Something is up with insurance agent Jerry Walden and Caleb might have an answer or two if he just got on with it. “Lucy’s Inferno” by Robb T. White comes next where Lucy is sent out by the jerk boss, Elliot Schwartzbach III, to a strip-mall in Northtown on Lake Erie. It burned and now the owner is in a rush for insurance to pay up. Lucy is an investigator and is very good at catching scammers, fraudsters, and the like. It isn’t the first time Lucy has had to go to Northtown so this trip is not going to be fun for a variety of reasons.

Just because the dead person was homeless and found by a dumpster does not mean the person was trash. Eddie Redmond certainly was not trash. He also was not a drug user so the needle still in his arm means it was a murder. Joe Moncrief intends to make sure everyone knows that fact and to catch the killer in “No One’s Trash” by Luke Foster. This story brings the entertaining issue to a close.

The Detective Issue of Guilty Crime story: Issue 4, Spring 2022 is a solidly good read. These stories are not light fluff. Instead, they have a whiff, and sometimes a much stronger scent, of noir running through each one. Detectives, with different styles and perceptions of what is right and wrong, are working in each case in a pursuit of what they see as justice. A lot is packed into each tale. No cardboard character cutouts need to apply. Well worth your time as are the previous issues of this magazine.

The previous issues and my reviews:

My reading copy was a purchase of the eBook earlier this month by way of funds in my Amazon Associate account.