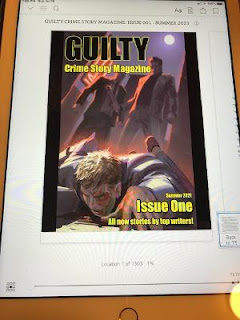 Guilty Crime Story Magazine: Issue 1, Summer 2021, opens with “Midnight At The Oasis” by Robb T. White. His uncle, Rexford Allan Roisch, likes to call himself, “the Notorious Double-R.” He also has mood swings, a prison rap sheet, and a plan. The plan tonight is for Uncle and nephew to grab stuff from a certain house high up in the hills as a wildfire rages nearby causing a mandatory evacuation.

Max Caspian is in Paris on holiday when the police sweep into the lobby of his hotel. Soon he is questioned by a Captain Badeaux who dismisses him as a suspect in the murder of Michelle Lambert. He also dismisses the idea of having Max Caspian, who is a psychic who has worked with NYPD on cases in the past, assist with this case. Until the good captain changes his mind in “French Twist” by Joe Giordano.

No one ever knew why Principal Taylor was found in the parking lot of a small-town drug store roughly two hundred miles away and suffering from a heart attack. His dying words as well as his theft of a truck from the school parking lot earlier in the day never made sense. Moving the dead man’s desk may explain at least one piece of the puzzle in “Unprincipled” by Stephen Sottong.

It has been a few years but Houser is the same guy he always was back in the sandbox. In “Give Me A Reason” by the magazine’s editor, Brandon Borrows, Chris Zender is in Miami and the plan is underway. Houser is the target and is going to get his. Finally.

Robin always looks forward to visits by Richard in “Bridal Wreath” by Jill Hand. He has his rules, but always brings her a plant. He created a garden out at the back of her place where it comes up against the state forest. He brings her shrubs and trees and plants them out there in the dark hours of the night. Robin is single, in her early 40s, and glad to have his visits to her farm.

Raven and Sparrow, two escorts, showed up to party with the three guys. At least that was the plan the guys had when the two walked in the door. Then the dope filled leather briefcase came out. The women had other ideas in “Cymbaline” by Alec Cizak.

“Chasing 61” by Bruce Harris takes readers back to when Roger Marris and Mickey Mantle were chasing history as the two Yankee players sought to break Babe Ruth's record of sixty homeruns in a single season. It is September 1961 and history could be made with 61 homeruns. History could also be made in the stands as Frank Zuletto, Frankie Z. to his friends, is in the stands chasing his personal best record of 61 wallets stolen.

“The Famous Last Words of Mickey Spillane” by Mike McHone is a nonfiction piece that brings the issue to a close. It takes a look at the last words of three of the books featuring Mr. Spillane’s legendary Mike Hammer character.

The seven tales and one non-fiction piece in Guilty Crime Story Magazine: Issue 1, Summer 2021, are all good ones. The tales are complicated crime fiction reads with a frequent hint of noir to them. Occasionally graphic, this is not a magazine for all crime fiction or all mystery readers. It most definitely is a magazine that is solidly good and well worth your attention.

I picked this up back in May to read and review.

I never saw that. Sigh.

Having gone back and found her name being explained in the story, I have now removed my reference from the review. I had thought you were referencing a certain song lyric that seemed to fit the tale very well. I apologize for both of my errors.

Looks like a good start. And one could suspect song titles are not unwelcome in this magazine, indeed...

It is a good issue. Thank you for reading and commenting, Todd.