FFB Review: Pilikia Is My Business by Mark Troy 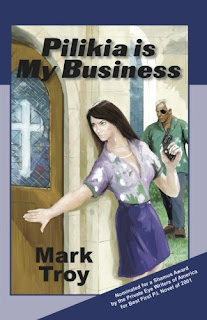 Written by 2002 Shamus Award Nominee Mark Troy, this fast paced and suspenseful novel revolves around Hawaii based private investigator Val Lyon. An ex cop, ex-con, and former pro basketball player, Val Lyon doesn’t tolerate idiots and has little patience for those who don’t do the right thing. Her latest case brings her to the office of Brian Magruder who used to work in the Honolulu Public Defender’s Office before going out on his own.

Part of the wealthy and politically connected Magruder family, Brian is a bit of a black sheep of the family as he has gone his own way. Among his many clients is Jean Pfeifer whose case has turned into a media firestorm. Jean claims that her ex-husband, Jason “Jock” Pfeifer abused their son, Nathan. Jean has stopped the visitations and has hidden their son in an effort to protect him from further abuse from his father. She faces contempt charges and jail time unless she brings Nathan back out of hiding and lets him see his dad. Something she isn’t going to do.

This strikes a chord with the media and the viewing public causing a media firestorm with Jean and her attorney at the center of things. Numerous groups get involved making Jean and by extension Nathan part of their agendas. That also ratchets up further the media scrutiny. Brian Magruder initially just wants Val to be part of the security team, and to protect Jean at a public rally the next day. With emotions running high on all sides, something is sure to go bade and it does. Soon, a simple body guard job morphs into a case involving death threat, blackmail, extortion and a missing child as well as the beginnings of a romance between Val and Brian Magruder.

While occasionally reminiscent of the Stephenie Plum type character because Val is also a woman with a sarcastic wit, Val is a much better character. Not only does she have a deeper and more complex background, she also learns from what happens and takes precautions as opposed to Stephanie who makes the same fundamental mistakes in book after book after book. Val is an evolving character over the course of the novel and one that builds quickly on experience.

That fact, coupled with a steady pace, plenty of twists and turns, and characters that come alive for the reader, it is no wonder this book was a Shamus Nominee. Simply put, Pilikia Is My Business is a very good one.