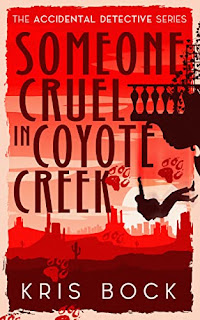 Please welcome back author Kris Bock to the blog today with an excerpt from her new mystery, Someone Cruel in Coyote Creek: The Accidental Detective Mystery Series. This is the third book of the series. Published by Tule Publishing, this book is scheduled to be released on Tuesday in eBook format.

Kate Tessler is convinced her sister is trying to kill her. In fact, she might prefer death to Jen’s “50 for 50 Challenge,” where Kate will try fifty new things throughout the year she turns fifty. She’s still adjusting to the limp she got after a bombing as an international war correspondent and her new underemployed life back in her childhood home in Phoenix. The last thing Kate wants is to prepare for paddle boarding, especially when she receives an anonymous message claiming that Mayor Todd Paradise is taking bribes. The author claims to have proof, including photos, and challenges Kate to publish the story.

Could good guy Todd, Kate’s almost boyfriend, really be corrupt, or are political enemies trying to destroy his career? Kate sets out to discover the truth, with help from her multi-generational, unconventional, and often troublesome crew. She thrived reporting from war zones, but can she survive a deadly fundraising party, a close encounter with a taser, a turn at an open mic night, and a hundred-pound dog named Whiskers?

After a lifetime of desert living, I had not expected a watery death. I’d grown up in Arizona, spent much of my adult life as a war correspondent in the Middle East, and had returned to Arizona a few months earlier after a bomb tore up my leg. Now my sister had determined that I should do a “fifty at fifty” challenge, where I tried fifty new things the year I turned fifty. It was hard to say no to Jen, mainly because she ignored the word and rolled right over you anyway. My birthday was a couple of weeks away, so we’d started early. At least she was paying for this “adventure” (in the financial sense; I might wind up paying in other ways), and she was doing it with me.

“Don’t be a baby,” Jen said. “Lots of people do paddleboarding. Children do it.”

“Uh, you do realize it’s called stand-up paddleboarding? Have you seen me stand lately?”

Jen gave a dramatic sigh. “You’re fine. You’re getting too dependent on the cane anyway.”

Easy for her to say. She wasn’t the one who had to use it. To be honest, my leg had gotten stronger over the last few months. I still limped and bumped into walls when I first got up after sleeping or sitting for a while, but once I’d taken twenty steps or so, I could usually walk straight. And the paddleboard instructor knew about my . . . situation. I still hesitated to use the word disability. It didn’t seem fair to claim that status when my injury was sudden and hopefully temporary. Plus, I didn’t want to be disabled. Granted, who did? Most people probably faced that future kicking and screaming, or in my case, punching and screaming, since kicking got harder when you had a bad leg.

The instructor got each of us set up with a life vest and a safety whistle. The whistle was required by law, in theory to warn boaters, but I figured it would also let me call for help if I got in trouble. An ankle leash would keep the board close, and the board could also be used as a flotation device. The paddle would help us move out into the lake and back again. Then we had hats, sunglasses, and long-sleeved shirts for sun protection. I’d gone into war zones with less equipment.

While the guide, Misty, helped the other people in the group, I quickly checked my email on my phone. I was hoping for a response from my boss at the Associated Press on my latest submission. I hadn’t been able to return to the field, and I reluctantly had to admit I might never be fit enough for that kind of reporting. As if the injury weren’t bad enough, my body didn’t bounce back nearly as quickly anymore. I’d started writing longer, more in-depth stories targeted at magazines, but I hoped to give my AP boss an excuse to keep me on a little longer since I needed the health insurance I wouldn’t get as a freelancer.

No response from her. I did see an email marked Urgent: Private, which was intriguing enough for a quick look.

Mayor Todd Paradise is taking bribes. Do you have the courage to publish the story?

I went cold, and not from the cool breeze off the lake. Todd Paradise had been a year behind me in high school. He’d gone from junior class president thirty years ago to mayor of our local town within the greater Phoenix area. I’d been spending time with him since I got home, and he seemed as nice and honest as ever.

The note wasn’t signed, and the email address didn’t provide any clues to the identity of the sender. It would be easy to dismiss the accusation, but that wouldn’t do Todd any favors. I could see three possibilities. Todd was taking bribes, in which case the story should be told, regardless of my personal feelings. Todd had done something that led someone to incorrectly believe he was taking bribes, in which case it was better to find out what was going on now, before the accusations became public. Or someone was targeting Todd with lies, in which case he needed to know that.

I emailed back: I’ll need proof and I need to know who you are.

“Time to put your phones away,” Misty said. Many people had been taking pictures of themselves or each other as they geared up. Now Misty collected the phones to stow them in the van. None of us could guarantee we wouldn’t take a spill into the water, and I could pretty much guarantee I would. The company had waterproof cameras for sale for those who wanted to record their adventures. Jen had one, of course.

We practiced getting onto the board and standing up several times on land before wading into the water. “I’m going to get you for this,” I whispered to Jen. “Be honest. Your real business plan is to make money off of humiliating pictures of me, isn’t it? You realize I don’t have any money to pay blackmail.”

“That’s fine,” she said. “The real money is in ads on YouTube videos. I’ll need you to go viral though, so make it good.”

We spread out in the shallow water, far enough apart that if one of us fell, we wouldn’t crash into the next person. Then Misty led us through the process of getting onto the board in a kneeling position, then crouching, and finally standing.

My muscles strained with the effort to balance. Falling into the water wouldn’t actually kill me, but I wanted to prove something, if only to myself. At the very least, I didn’t want to be the first person in the group to fall.

I very slowly and carefully turned to look at her.

“Hold on. I want a photo to prove this happened.” She shifted her paddle to her left hand and fumbled with the waterproof camera strapped around her wrist.

My board bobbed gently in the waves at the edge of the lake. My bad leg ached as I tried to keep my knees bent and my back straight, as instructed. I attempted a smile that felt more like a grimace.

As Jen got the camera up to her eye level, she wobbled. Her paddle smacked against the side of the board. Her arms flailed, the camera flying to the end of its wrist strap.

She came up spluttering and tossing her head. I laughed so hard I had to kneel on my board and grab the sides. The water rocked the board and splashed my hands and knees, but at least I didn’t fall off.

When I could breathe again, I said, “Don’t forget to get a photo of yourself. I want to prove this happened.”

Jen grinned, pointed the camera toward herself, and took a picture as she leaned on the board with one arm.

Maybe this fifty at fifty thing wouldn’t be so bad after all.

Kris Bock writes novels of mystery, suspense, and romance, many with outdoor adventures and Southwestern landscapes. Her Furrever Friends Sweet Romance series features the employees and customers at a cat café. Her romantic suspense novels featuring treasure hunting, archaeology, and intrigue in the Southwest are perfect for fans of Mary Stewart or Barbara Michaels. Learn more. As Chris Eboch, she writes for young people, including ghostwriting for popular children’s mystery series.  The Eyes of Pharaoh, a middle grade mystery set in ancient Egypt, brings the past to life as three friends investigate a plot against Pharaoh.

Tweeted the post to the @ReadersRoost account.
Kris is an author friend from the MFRW authors group. :-)

Interesting Blurb, Kris, and I enjoyed reading the first chapter.

Thanks, Iris and Not Charlotte!