Child kidnap as well as child molestation are themes that, as a reader, I stay away from and very rarely read. While I recognize for a writer they represent a vast emotional goldmine, I’m just not interested in reading such books. I read to be entertained. Not to be reminded of what we often see in our daily news. In this case, I made an exception because Frank Zafiro is one of those authors that one makes exceptions for. 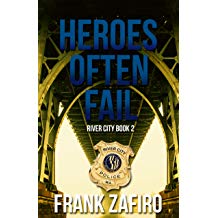 The parental nightmares begin, as the often do, under clear skies and the promise of a new day early in the morning. It is March 15, 1995 as six year old girls Kendra and Amy walk to school like they have before and will walk home that afternoon like they have countless times before. That is until the van comes and slides to a stop next to them. They both freeze as a man leaps out of the van. He grabs Amy and Kendra runs knows the man could get her next. Instead, she gets away. The man in black didn’t get her but as the hunt begins for Amy, Kendra is filled with guilt.

At the River City Police shooting range, Stefan Kopriva is filled with pain as well as guilt. Having barely survived a shootout at the Circle K six months ago, Kopriva remains on light desk duty. Despite being shot three times he survived and now wonders what more he could have done then and when his reputation will return to what it was before the robber known as Scarface rocked River City, Washington. The six months since have been painful. Not only as his body struggles to heal but in the misplaced admiration by some and the misplaced hostility from other members of the small police force who feel he, at best, failed them. Powerful pain medications and a growing romance are the only things keeping him going as he hates the mind numbing routine of desk duty. He wants his old life back and a symbol of that is getting off the restrictions and back on the streets.

He gets it but not the way he wants. As news of the possible kidnapping spreads through the department, it becomes a classic all hands on deck situation with every person pressed into service. Kopriva, as well as the other men and women of the River City police force desperately try to find Amy knowing that as the hours and days pass the idea that it is a simple kidnapping for ransom is more and more unlikely. For little Amy, kidnapping is quickly the least of Amy’s worries.

Much of what happens regarding the child molestation in this well written but disturbing novel happens offstage. As such, scenes and images are created initially with a heavy emphasis on implied actions that are never described to the reader. As such, while not graphic or detailed, the implications and meanings of what is happening to Amy as well as what happens to another child in one of several secondary storylines are very clear and that material may disturb some readers.

With that being said, it should also be noted that this is a very good novel. Building on characters and events from the preceding novel “Under A Raging Moon” author Frank Zafiro has created a substantially more complex police procedural with multi layered characters, a rich setting, and plenty of action. It is clear that from a technical aspect this novel is superior in all aspects to his first novel which was very good in its own right. This novel is a step upwards and it is clear that Frank Zafiro is steadily improving his fictional game.

It is often said and assumed by many that an author’s second book will be weaker than the first. While that often is true, it certainly is not the case here. What is also true is the fact that we have to wait far too long till the fall of 2008 for the third River City novel “Beneath A Weeping Sky.”