Some parts of the country seem to produce anthologies on a regular basis. Florida, for example or Minnesota for another seem to produce if not just one several a year. Texas doesn’t seem to partake in these deals and why I have no idea. The anthology below comes to readers courtesy of writers based in New England but the cold is only part of the story in a few cases. 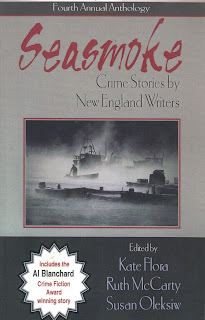 This is the fourth annual anthology released by Level Best Books and this one once again features the annual “Al Blanchard” award winning story. The winner was “Roundhouse Medeiros and the Jade Dragon” by Jim Shannon. The story is a good one as are all of the stories in the anthology. Below are a few of my personal favorites:

“Winter Rental” by Barbara Ross revolves around the idea of a small group of women time sharing a heated bungalow on Nantucket. While their gender may be the same, their places in life and purposes are very different.

Stephen D. Rogers can always be counted on for a good tale told well and “/KS” certainly fits the bill. Transcribing interview tapes of detectives may not be glamorous but the information provided can help.

Planning the harvest is not easy as Frank Cook observes in his story, “Liberty.” But, when it all comes together, the harvest can be bountiful and a beautiful thing.

“Disturbance in the Field” by Roberta Isleib proves that sometimes the cops just know things have been tampered with despite evidence to the contrary.

You just can’t judge things on appearance as S. A. Daynard skillfully points out in “The Good Samaritan.”

In “The Hechicera’s Ace” by John Russo lady luck isn’t all she is advertised to be.

Despite the planning, having a loan go bad simply isn’t acceptable in “Killer De-Termination” by Paula Mello.

The stories, in general, often are complex and feature characters living on the fringes that don’t quite fit into society. Coping with physical demons of both the mental and physical variety, the se characters are in a daily struggle to survive. Sometimes the outcomes are considerably more positive than in other cases though each story provides a sort of life lesson to the reader. Seasmoke: Crime Stories by New England Writers is a good anthology that showcases new and well published writers coming from a variety of viewpoints and styles and culminates in a good enjoyable read.