Andy Pickard loves Bethel and there is no doubt about that. In his late 20's, this former Texas Ranger understands why Bethel won't leave the family farm and her ill mother. He doesn't understand why Farley Brackett, his future brother-in-law hates him so much or why he won't help out. Or why he is constantly on Andy's back about his being held prisoner by the Comanches when he was a kid or all the other things he harasses him with considering all the free labor Andy is doing. 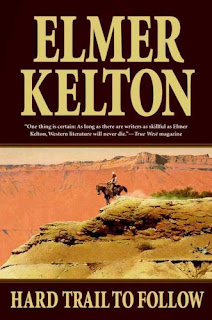 Farley is a hard man and unappreciative. After a brief physical skirmish that neither man won, Andy decides to hit the trail and leave it all behind. Bethel isn't leaving and Andy can't put up with Farley anymore. If he stays, there might be another fight and somebody could get seriously killed or hurt. Andy isn't going to put Bethel through that and since she isn't going to leave, all he can do is head out with an unspecified need to do something else with his life. That decision sends him before lone into a confrontation with bank robbers, the death of a friend, and his putting on the badge of the legendary Texas Rangers once more.

It also sets him on the trail of an escaped outlaw across Southeastern and South Central Texas. Times are changing with the Indians on the reservations for years now, land and pastures fenced, and the telegraph spreading the latest news far and wide. Posses still ride and a fugitive can still make good on the escape but the telegraph spreads the news of the manhunt faster than the fugitive can travel. For both any Pickard as well as the fugitive known as Cordell, the chase is a long one full of twists and turns as well as a journey of self awareness as much as anything.

Author Elmer Kelton is considered by many to be the premier writer of western literature. Known for his authentic settings, realistic characters and concise prose he is a winner of Seven Spur Awards from the Western Writers of America as well as many others. The native Texan, who has authored more then fifty novel, is a legend and an author known to work the shades of gray. His characters wear neither black or white hats, but gray ones of varying shades as they go about their hard struggles in novels that don't romanticize the way it was for most people.

Such is the case here where the lawman and the outlaw could easily be nearly the same man. As the chase wears on, the reader shifts back and forth between both characters as well as a few others, in ways that not only bring the novel to life but illustrate truths that still very much hold true today. Portrayed by many as simpler times, they weren't. They were just different, but contained many of the same struggles that most face today. Author Elmer Kelton illustrates that point along with a few others worth reading in this engaging western.

"By The Light Of The Moon"The Carpathian Shadows Volume 2
http://www.booksforabuck.com/sfpages/sf_08/carpathian_shadows2.html
Posted by Kevin R. Tipple at 8:01 PM