Claire Hanover retruns in "Hell in a Handbasket" by Beth Groundwater 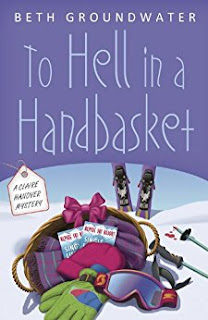 It has just been a couple of months since the events in "A Real Basket Case." While Roger is out of jail and cleared, their marriage has not returned to normal. Claire wants the whole family together at Breckenridge for a spring ski vacation but her adult children have inherited her independent streak. Her son, Michael, couldn't make the trip from Boston. Then, after everything they had gone through to get their daughter Judy home from France, Judy would rather hang out with Stephanie, the sister of her boyfriend Nickolas Contino. It certainly wasn't the family vacation she had planned and Claire is trying to be nice as she lets Judy ski off ahead with Stephanie.

That routine decision leads to a tragedy minutes later on the Ptarmigan slope. Stephanie is mortally injured after someone hit her and sent her crashing into a tree. While law enforcement and rescue personal believe it was the fast moving snow boarder who came way too close to the foursome minutes before, Claire believes the tracks in the snow tell a different tale. As in the last book, her theory is easily dismissed by local law enforcement. A second death soon seems to prove her theory making her unwitting daughter the killer's next target. Claire, much to the annoyance of all involved, launches her own quest to find out what is going on in order to protect her family.

Against the backdrop of the Breckenridge ski resort, author Beth Groundwater creates a fast moving and intense sequel that surpasses her first book. While gift baskets do play a role in this book, Claire spends most of her time thinking about this case with occasional consideration of what happened in "A Real Basketcase" and the ramifications of those events on all involved. The issues in the first book create an interesting secondary story line with various angles at play behind the main mystery of Stephanie.

Filled with realistic dialogue, plenty of action, a complicated case and parenting issues all to a familiar too many readers, the novel delivers on all levels across the board. This cozy mystery packs quite a punch and proves that good story telling is good story telling no matter what the label of the sub genre.

I received an ARC of this title directly from the publisher in exchange for my objective review.


Readers new to this series and author may also wish to check out one of Beth's stories published by B. J. Borg in the archives of the website of Mouth Full of Bullets. "Flamingo Fatality" was published in the Summer 2007 Issue (#4) and is a mighty good one. The direct link is:
http://www.mouthfullofbullets.com/4.2sFlamingoFatality-BethGroundwater.htm In the interests of fair disclosure it should be noted that I was an assistant editor with my main duties to be a columnist and book reviewer while the site was in operation. I was allowed the opportunity a couple of times to advance read for publishing consideration less than a handful of stories and had no advance knowledge of Beth's stories or any other ones in that issue.

Email ThisBlogThis!Share to TwitterShare to FacebookShare to Pinterest
Labels: claire hanover mystery series, mystery, review, to hell in a handbasket