It is Friday and that means it is time for another Friday’s Forgotten Books Review. (For the complete list, surf over to http://pattinase.blogspot.com/ Lots of  good reading there and not just on Fridays.) Barry Ergang made his FFB debut here last week with his review of Killers Are My Meat. This week he reviews Case of the Vanishing Beauty by Richard S. Prather.

Case of the Vanishing Beauty (1950) by Richard S. Prather
Reviewed by Barry Ergang

Released in 1950, Case of the Vanishing Beauty was Richard S. Prather's first published novel but the second one he wrote. The first, The Maddern Caper, was subsequently published under the pseudonym David Knight but retitled Pattern for Murder. Still later it was retitled The Scrambled Yeggs and published under Prather's own name. (All of this is explained by Prather in an interview conducted by Linda Pendleton.)

Case of the Vanishing Beauty begins when private detective Shell Scott is hired by Georgia Martin to find her missing sister Tracy. She also insists that Scott accompany her to a less-than-respectable L.A. nightclub called El Cuchillo (Spanish for "the knife"), but beyond saying she might need his protection, she won't tell him why.

At El Cuchillo, Scott and Georgia watch the feature act: the knife-throwing Miguel Mercado and his beautiful assistant/target Lina Royale. After Scott has an altercation with Mercado, he meets the club's owner, the equally repellent Maggie Remorse.

When he and Georgia leave the club, they're tailed by someone in another car who's not reluctant about shooting at them. Scott fires back and the shooter takes off. But Georgia has been fatally wounded. She's able to say "I killed...Narda" before she dies.

Determined to see the case through despite—and because—of the loss of his client, but with very little to go on, Scott talks to his friend Captain Phil Samson, head of L.A. Homicide. When he mentions Narda, Samson tells him a man by that name is the head of a religious cult called the Inner World Society of Truth Believers.

Scott returns to El Cuchillo and later tails Miguel Mercado, who practically leads him to the IW's door. It seems pretty clear the cult is somehow involved in the events that led to Georgia Martin's murder and the disappearance of her sister. Consequently, Scott attends a service, pretending to be a philanthropic sort and using the name Francis Joyne. Narda, he discovers, is very much alive.

As events unfold, Scott eventually finds and rescues Tracy, but there are still multiple mysteries to be solved—among them why Georgia was killed and how Narda, the IW, Miguel Mercado, Maggie Remorse, and twin gunmen Peter and Paul Seipel fit into the picture. Solve them Scott does, of course, and in a fairly-clued manner, with plenty of physical action in the process. 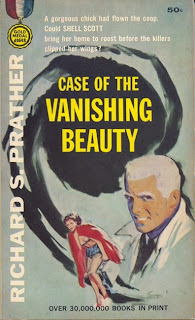 I first read Case of the Vanishing Beauty

when I was in my teens—more than forty years ago—so apart from recalling that Scott's term of endearment for Lina was "pepper pot," I had no recollection of the story during my rereading. But when I was a teenager, I didn't read the early Scott novels in order of publication—gave no thought to doing so—I read them in whatever order my father or I purchased them or as the whim took me. I mention this only because, remembering certain things about the series even after all these years, Case of the Vanishing Beauty has some of the earmarks of an early series novel in the way it establishes scenes, descriptions, and authorial tendencies that will recur in later books. Among the latter is Prather's habit of having first-person narrator Scott tell the reader at some point during his cerebrations that there's something tickling at his unconscious which, if he could only pull it out, would completely elucidate and solve the case at hand. The technique serves the dual purpose of offering a challenge to the reader, letting him know that he now has all the information Scott has and can solve the mystery himself if he can put all the pieces together; and allowing the author to protract the action and suspense so he can build to a "sock finish."

There have been many Shell Scott novels with sock finishes. Case of the Vanishing Beauty is not one of them. Oh, it's satisfying as far as wrapping up the mystery is concerned, but it doesn't have the wild action and comedy Prather became famous for in later works. Nevertheless, it's a long way from the weakest in the series, and stands up as a fast-paced piece of entertainment.

For more on the Golden Age of Detection as well as about this book follow the link
http://gadetection.pbwiki.com/Case%20of%20the%20Vanishing%20Beauty

I keep thinking I need to read the first Shell Scott. Now I know what to look for.

Sad to say I have never read any. Barry keeps bringing up books to me and I have to confess I have not read them.

I began reading the Scott series in order some years ago, and thought this was better than the first one. Your review brought the plot back though not the resolution, but reminded me that I liked it. I've read several others, though by no means all I have on the shelves, and think it's time to read another. Thanks for the review.

I'm glad you liked the review and the book, Richard. By all means read some of the others. Many of them are gems.

Thanks for coming up with the idea of celebrating the Shell Scott series. I grew up reading these books and rereading them brings a certain amount of nostalgia. They don't write books like this anymore!

That comment above should have said "better than the first one I read", which was a dozen books into the series, as I recall. So this is the first, George did the 2nd, I reviewed the 3rd today. Interesting. And yes, the one I read, EVERYBODY HAD A GUN, has that thing where something tickles his memory.