It is Friday and that means it is time for another Friday’s Forgotten Books Review. It also seemed like a good time to do something different. For the last several years, my friend Barry Ergang has been contributing the occasional review to this blog. One of the things I like about Barry’s well done reviews is the fact that he reviews books I normally would not do. It seemed like a good time to share the Friday workload with him as well as give you, the reader, a different perspective than what you see most days here. Therefore, Barry makes his Friday debut with Killers Are My Meat by Stephen Marlowe.
KILLERS ARE MY MEAT (1957) by Stephen Marlowe
Reviewed by Barry Ergang
One of the more literate of the hardboiled writers to emerge during the Fifties, the prolific but undervalued Stephen Marlowe created Washington, D.C.-based private detective Chester Drum, most of whose cases take him out of the country. 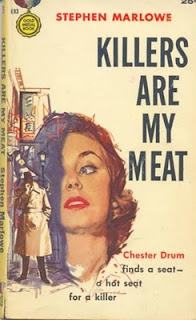 Killers Are My Meat starts when Drum is asked by the wife of his mentor, a P.I. named Gil Sprayregan, to find her husband. Drum soon learns Sprayregan has plans to blackmail Sumitra Mojindar, the round-heeled wife of a highly placed East Indian official, not realizing that everyone in D.C. knows of her promiscuity and that she herself doesn't care who knows it. Sprayregan is killed in a deliberate hit-and-run, and soon after his wife is shot to death by a smoothly vicious associate of Mrs. Mojindar who cannot be prosecuted because of his diplomatic immunity.
During the course of these events, Priscilla Varley tries to hire Drum to accompany her husband Stewart to Benares, India, where Varley will attend as a Western Observer an Afro-Asian Conference at which Mrs. Mojindar's husband is to be a key speaker. Varley is a man looking "to find himself" in the exotic, "mystical" East. Initially Drum declines the job, but after the Sprayregans are murdered, he agrees.
The plot develops further in Benares when Varley seeks out a sadhu, a holy man, and then goes missing; and Drum encounters an old friend and former lover, reporter Marianne Wilder, who is covering the conference. When Marianne is kidnapped by the same people who want Drum to deliver Varley to them, the action picks up and seldom flags. As things progress, Drum learns what Mrs. Mojindar and company feared Sprayregan had on them, and has to bring things to a satisfactory conclusion without causing an international incident--if he can survive the beatings he sustains along the way.
Imagine Philip Marlowe gone international and you have a sense of Chet Drum--though Drum's a lot more physical, less inclined to wisecracks, and a touch less cynical.
Born Milton Lesser (he legally changed his name), Stephen Marlowe writes in a crisp, literate style that shows definite flashes of Raymond Chandler, including the occasional Chandleresque simile. He has a good sense of character and an excellent sense of place and pace. If you enjoy quick, exciting reads, you owe it to yourself to seek out the Chester Drum novels by an author who was popular in his day but who, regrettably, is all but unknown nowadays except by collectors and nostalgia buffs.
More on the author can be found at: http://gadetection.pbwiki.com/Killers-Are-My-Meat
Barry Ergang © 2011
To celebrate e-book week, Barry Ergang's impossible crime novelette, "The Play of Light and Shadow," has been reduced in price at Smashwords: http://www.smashwords.com/books/view/24377 Download a copy to your e-reader or computer between now and March 12th. If you like whodunits/howdunits, try to solve this one.
Barry’s other offerings at Smashwords can be found at: http://www.smashwords.com/profile/view/cassidy20
Posted by Kevin R. Tipple at 8:06 AM

Great pick. I'm a Marlowe fan from way back.

Good review. They damned sure don't make paperback covers like they used to. I almost felt young again for a few seconds looking at that one. Almost....

Great title. Never read any of his books. I'll have to look him up :o)

looks to me like Barry made a very good choice. Thank you one and all for reading and commenting.

You're right, Milton, the age of wonderfully lurid paperback covers is long gone.

I kind of wonder if they will come back via the e-book readers.

I've read all the Marlowe/Drum novels and KILLERS ARE MY MEAT might be my favorite. Love the cover, too!

Just added it to the TBR pile!

It's always good to learn about forgotten books. So often good writers are ignored or neglected.
Thank you for sharing this with us.