It is Friday and that means it is time for Friday’s Forgotten Books hosted by Patti Abbott. Patti is taking this Friday and the next two off which means Todd Mason is filling in for her. Somebody else you should be reading on a regular basis by the way.

If you are like me (and heaven help you if you are and I am sorry for you and your family) you are sick and tired of the oh so cute and sappy mystery and crime stories with their weak ties to the season. I’m very tired of the posts to various lists about this story or that which is supposed to be cute, clever and just perfect as you nestle around the fire with your hot chocolate and family. Great! A Norman Rockwell holiday scene with just a little crime/ murder thrown in. But, not too much crime/murder as it is the holiday season, don’t you know?

Before you label me a Grinch, I’m not.  I have never understood the allure of the holiday murder story. This year, I understand it even less and find the whole holiday commercialization very annoying regardless of product being pushed. Granted, none of us here are in the holiday mood with what we are dealing with on a daily basis. Sandi has always been the driving force behind celebrating every holiday and this year that is not happening. No tree is up, no lights are up, no hanging stockings or any of it, as this year with everything going on it just didn’t seem worth it. The focus is on what are we going to do if we don’t make the rent, praying the car holds together long enough to get Sandi back and forth from Chemo, and things like that. Escapism-- however brief it lasts-- through a book or TV/movie is the thing right now.

Therefore, if you are also looking for something completely different, I suggest the very good FLANK HAWK: A First Civilization Legacy Novel written by Terry Ervin II. It even now has a sequel, BLOOD SWORD.  I don’t know yet how the second book is but I promise you the first book is very good.  I am not one to do top ten lists of books read--everyone and their dog, cat and hamster seem to do them--but, if I were this book would be right up there near the top. It truly is that good. 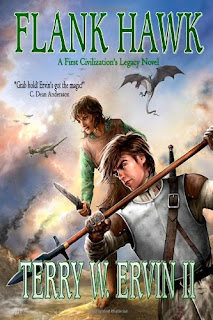 For Krish and his cousin Guzzy, the recent battles outside of their small village have been more then the annual minor attacks designed to disrupt the yearly harvest. The young men fight to defend their village, Pine Ridge, and to protect all they hold dear. With swords and spears protected by magic and salt, they fight on as the enemy in many different forms continues to press the attack and people they know die around them. Back up is on the way as kingdoms make alliances in order to slow the advance of those loyal to the evil necromancer king. One such alliance allows Prince Reveron of Kreese to eventually take over and lead the small group Krish is part of into battle. Krish becomes noticed not only by the Prince but by others and gradually works his way deeper and deeper into the circle of those that Prince Reveron trusts. While Krish may not have had formal military training, he acquires battle skills at a rapid rate and has certain other skills that he continues to try to keep hidden from those around him.

The book is highly recommended as FLANK HAWK: A First Civilization Legacy Novel is a mighty good read.

Thanks for the plug, as well as the review (and as someone who's been having his own helping of bad luck, you have my sympathies for Sandi and your challenging times). Zombies sure have been "evolving" in popular culture over the last century, haven't they? Ever check out Bill Pronzini's anthology of some decades back, ZOMBIE! (Arbor House really didn't know how to package these.)

Thanks, Todd, I appreicate it. Yep, too much ishappening to too many folks.

No, I have not read the Pronzini book. I'm not a fan of the whole zombie deal but this use of them was a far different deal than what I had read/heard about before.

Flank Hawk is a great book. I haven't got to the sequel but I'm sure it will be even better.

Kevin, I understand your finding it difficult to slide into the festive aspects of the Christmas season.

Thank you for the kind and positive words on Flank Hawk. Hope you enjoy Blood Sword equally.

Cher, glad you enjoyed Flank Hawk! Hope you're able to get a hold of Blood Sword and enjoy it too.

Thanks for reading, Cher. I too have high expectations for the next one.

Everything is all wrong, Terry. Even the NFL is in on it as tomorrow there is only the night game. I will have to watch basketball and hope a fight breaks out. :)))