FFB Review: "Death Will Get You Sober" by Elizabeth Zelvin

It is Friday once again and that means it is time for Friday’s Forgotten Books hosted by Patti Abbott. Having reviewed the latest in this series Death Will Extend Your Vacation yesterday it seemed fitting to again run my review of the very first book in the series Death Will Get You Sober…… 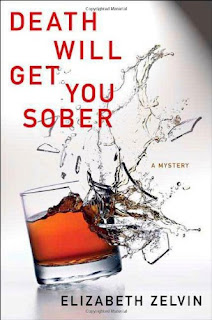 Waking up in detox is not a new thing for Bruce Kohler.  This time around it is Christmas Day and this time it is on the Bowery in New York City.  Bruce knows what to do to stay sober.  The real trick is making it last and up until now he hasn't been able to despite his friends Jimmy and Barbara. After so many attempts, they know have adopted a hands off approach and are waiting for Bruce to get serious about staying sober.

He quickly befriends another inmate Godfrey Brandon Kettleworth the Third who goes by the nicknamed of "God" to the annoyance of some and amusement of others.  But, with Bruce he shares that he would prefer to be called Guff. He shares a few other interesting tidbits about his family and his past but not a lot as Guff is a cynical and private person. Bruce and Guff are kindred souls and recognize pieces of themselves in each other and as a result a friendship born of location and circumstances is growing into the real deal. Both are well into their thirty day stretch when, during the middle of the night, Godfrey has some sort of seizure before dying in front of Bruce.

His death along with other recent events makes Bruce suspicious that something sinister is going on and it could involve the Bowrey staff.  With support and assistance from Jimmy and Barbara, Bruce begins to investigate the issue while battling to change his ways and remain sober. After all, they reason, if he has something to occupy his mind other than contemplating his own life, Bruce might actual make it this time sobriety wise. His sobriety, along with his own life, could easily be considerably shortened if certain people have their way.

This debut novel by psychotherapist Elizabeth Zelvin is based in large part on her experiences directing alcohol treatment programs. With an extensive background dealing with issues of alcoholism, addiction, and codependency among others, one could expect a novel full of jargon and information dumping on the subject.  One could be very wrong.

Instead, what is here is a novel full of rich and complicated characters in a different setting than most novels dealing with the age old problem of murder in their midst. The backdrop is alcoholism and treatment but the main thrust of the novel is murder. Like any novel of any depth at all, the characters have to deal with real life issues at the same time and such is the case here.  Instead of jargon filled informational dumping, author Elizabeth Zelvin releases the information piecemeal when warranted.

The result is an engrossing and complex tale at a mere 259 pages that provides a glimpse of the real world of detox and chronic addiction.  Along with that glimpse, the author skillfully weaves in the primary tale of family, friendship, deceit, murder and the basic idea that craving for something can come in many forms with just a few of them being socially acceptable.

Thanks for your reviews of Liz Zelvin's books, Kevin. I've been wondering for awhile if they'd be my cup of tea, and your reviews have convinced me to give them a try.

Hope you like them...and thanks for coming by, Lisa.