The days go by and once again it is Friday. That means it is time for Friday’s Forgotten Books hosted by Patti Abbott. This week Evan Lewis is collecting the links at his Davy Crockett's Almanack of Mystery where he also has an excerpt from his short story The Continental Opposite which can be found in the May edition of Alfred Hitchcock Mystery Magazine (AHMM).

Patti might be doing it this week or might not. I never saw an update on her blog as to what was happening. Even if she isn’t she will have the link to the designated link gatherer and I will fix this late Friday after we get home from Sandi’s chemo.

By the way---- I don’t say it enough---thank you all for your thoughts and prayers here on the blog, by e-mail, and elsewhere across cyberspace. Sandi is having a very hard time with this chemotherapy  and it really helps all of us to know so many folks are keeping her in their thoughts. We really do appreciate it.

This week I thought I would run one of my old ones from way back on a series that you must read. Not only is Bill Crider a class act and a wonderful human being, he is a mighty  talented author. Murder in Four Parts: A Dan Rhodes Mystery is one of many installments in the Sheriff Dan Rhodes series --as you no doubt figured out from the title---and is well worth your time as are all the other ones. 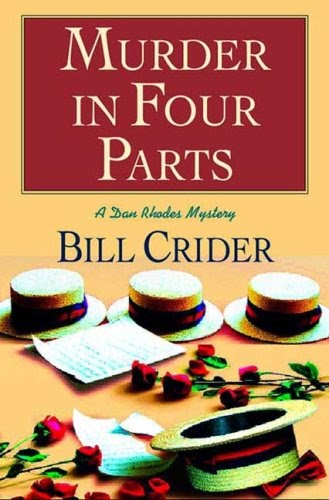 Like many of us, Sheriff Dan Rhodes knows he really can't sing and doesn't need some guy on a certain TV show to tell him. As a sheriff, Dan Rhodes is asked to join just about every group in Blacklin County. Most of the invitations he declines and he has every intention of declining the current invitation to join the barbershop chorus. Hack, the dispatcher, counsels otherwise and points out that it would help come election time.

The next election is more than a year out so Rhodes isn't worried about that. Elections are a sore spot with Rhodes anyway and he is more than a little tired of folks threatening him with their vote if he doesn't do things the way they want. Something that happens soon enough in the latest in the series along with a death.

Maybe the director of the barbershop chorus, Lyold Berry, wasn't interested in Rhodes singing. Maybe Lloyd Berry was hoping that if Rhodes joined the chorus, Berry would have some protection. Certainly his floral shop wasn't safe as that was where he was found dead behind the counter with his head bashed in. Proably due to the heavy metal wrench next to the body. Solving the case requires Rhodes full attention, but the frequent sightings of a naked man outside the local attorney's office, the chicken eating alligator, and a host of other things will fight for attention as well. That, and the constant reminders, like the drumbeat of the approaching storm, of the fact that the next election is coming.

On one end of the spectrum, you have Joe Landsale and his vision of East Texas. A vision of a landscape frequently populated by human beings full of violence, guile and twisted character. In his work there is a sense of the gothic coupled with a living breathing evil that many graphically and willingly embrace.

At the other end, you have the Dan Rhodes series by Bill Crider. A vision of East Texas where most are hardworking honest folks trying to do the right thing. A vision where occasionally, somebody slips up and kills somebody, but they never really meant to do it. It just happened and usually the victim bears some responsibility for his or her demise. And Rhodes just keeps asking questions until he catches the killer in one lie too many.

While both visions of East Texas have a lot of truth in them, Crider is doing for East Texas what Philip Craig did for Martha's Vineyard and Steven F. Havill has done for Posadas County, New Mexico. Unlike Havill who changed his series several novels ago by making his signature sheriff Bill Gastner nothing more than a minor player, Crider has kept Rhodes front and center in a series that consistently delivers a good read. You can't ask for more than that.

This book was provided by the good folks of the Plano, Texas Library System.  Please support your local library. They work to help keep people like me sane. Right now they and a lot of authors are working serious overtime.

BETWEEN THE LIVING AND THE DEAD: A DAN RHODES MYSTERY is scheduled to be released on August 11, 2015.
Posted by Kevin R. Tipple at 12:30 AM

I love the Sheriff Rhodes books and this one sounds like a winner (I haven't gotten to them all yet, obviously). Thanks for the review of it.

"Murder In Four Parts" is one of my favorite Dan Rhodes mysteries. I am looking forward to Mr. Crider's new book, "Between the Living and the Dead".

No doubt you followed the link I have to the new book at the bottom of the review, Karen.

It is a good one, Richard. I am pretty sure I have reviewed all of them here at one time or another.