Review: "Li’l Tom and the Pussyfoot Detective Bureau: The Case of the Parrots Desaparecidos" by Angela Crider Neary

Li’l Tom is a kitten that is doing pretty good for himself these days as he heads up the elite Pussyfoot Detective Bureau of Telegraph Hill located in San Francisco. The hill is a great place to have a business as well as his residence because there are so many places to hide and do cat things. Because 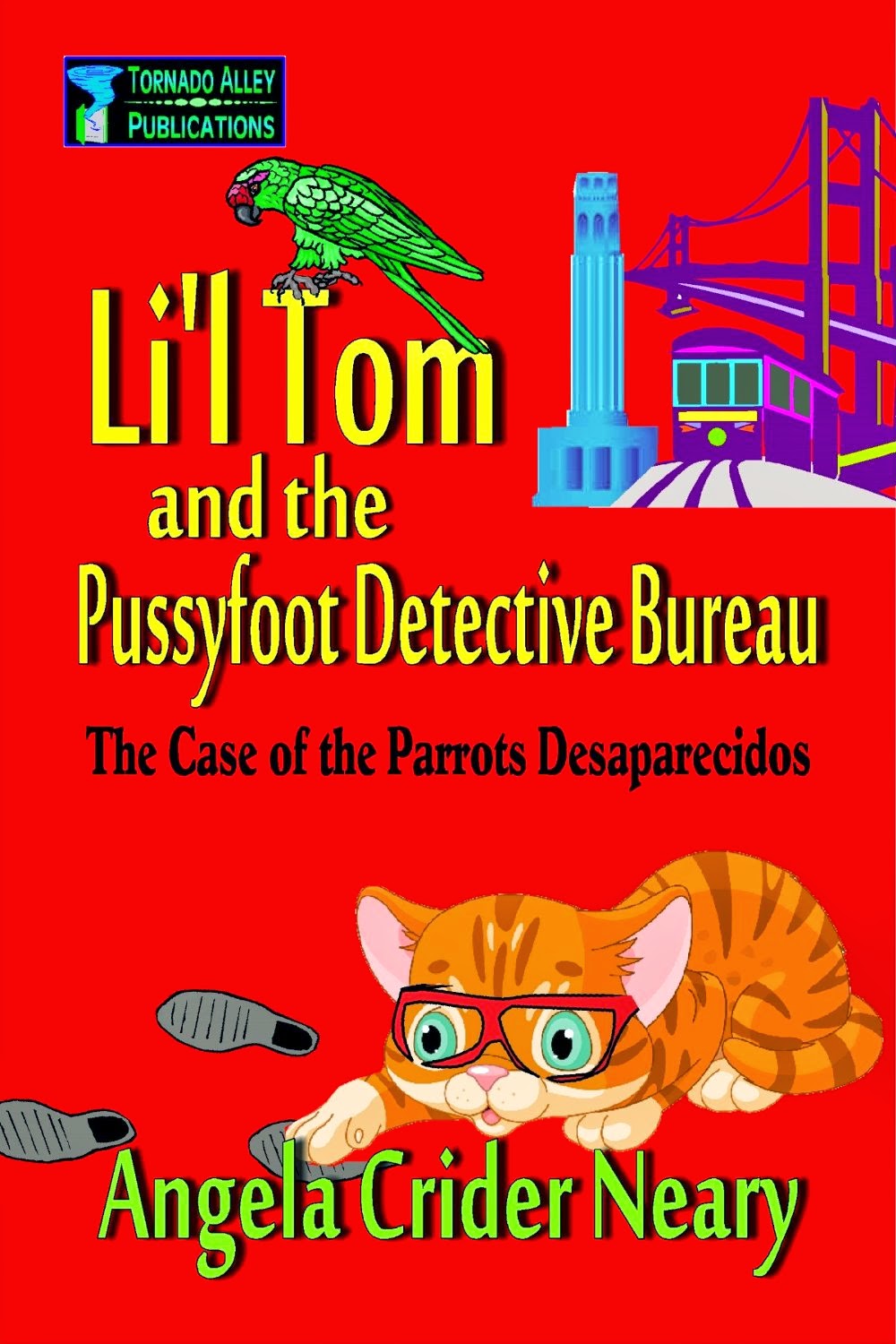 the humans of the San Francisco Police Department aren’t interested, the Pussyfoot Detective Bureau helps animals with their problems such as missing rubber toys, catnip traffickers, and more. For Li’l Tom dodging dogs and noisy dive bombing feral parrots is hard enough, but there is M’Cavity who is definitely the bad cat of the neighborhood.

Named for his very bad teeth, M’Cavity likes to mess with Li’l Tom. Fortunately, M’Cavity missed out on eating the latest client of the Pussyfoot Detective Bureau. The offices located in a lower section of steps near the sub-basement storage area of the Malloch Building are not exactly where any self-respecting parrot would go unless he had to do so. But, according to the Lovely Lola, Li’l Tom’s assistant, the bird sitting outside in the tree is waiting for him.

While the only reason to tolerate a parrot is as a snack, Li’l Tom takes all clients.  Promising not to eat the parrot and getting the parrot to agree not to peck or claw him, Li’l Tom and the parrot sit down for a meeting. The parrot, Guillermo, wants their help to find his missing sister, Judit who has been gone three days. He is highly agitated with worry and as a result much louder in his vocalizations which is not a good thing since parrots are pretty loud naturally.  Guillermo says somebody had to have taken her from the cage she lives in with Alan, Jamie, and Guillermo. Their home is located one of the houses up the hill. Apparently was taken during the night just a few days ago. 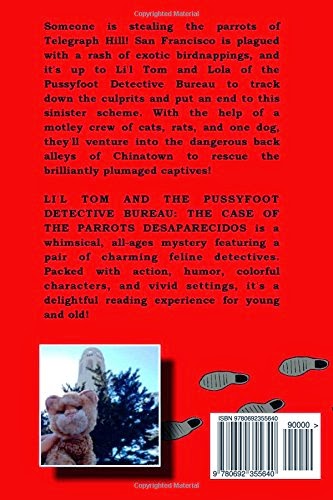 While she is a pretty strait laced bird, she did have some shady friends. She may be missing because she was flying around with some blue-crowned birds that were a bad influence on her. Those birds are trouble as they stay out late and sip up stale beer from puddles outside nearby bars and even hang out with the notorious M’Cavity among other things.  But, they may not be at fault as something or someone else could have caused her to vanish. Guillermo want her found and is willing to pay in the way Lil Tom likes best – Tender Vittles.

It is a case of mystery and deceit that will lead Li’l Tom, Lola, and a couple of animal companions to Chinatown and back in search of not just Judit as well as a number of other missing parrots. This cute and very clever book spins a tale that appeals to children as well as adults familiar with classic mysteries. That along with some humor and observations about humans and animals make Li’l Tom and the Pussyfoot Detective Bureau: The Case of the Parrots Desaparecidos a fun and mighty good read from Angela Crider Neary.

PDF review copy was supplied by the author in exchange for my objective review.