Mark Troy is back today with another installment of his series on the female private detective. This time around he covers Honey West. Make sure you check out the earlier installments of this series as well as Mark’s books and website. 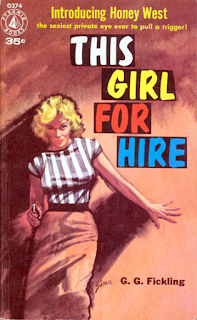 I'm H. West, a private eye. The H stands for Honey. I may be female, but I know my business.

Meet Honey West, one of the most successful female private eyes—or private eyeful. She's tough, brainy and sexy, a curvy bombshell with taffy-colored hair, blue eyes, a baby-bottom complexion, and a heart-shaped birthmark on the inside of her right thigh. She is usually armed. The creation of husband and wife team, Forrest (Skip) and Gloria Fickling, writing as G. G. Fickling, Honey appeared in eleven novels from 1957 to 1971.

Skip, a sports writer, and Gloria, a fashion writer, were friends of Richard S. Prather, the creator of Shell Scott, who urged them to write a female private eye. Honey inhabits the same testosterone-charged, Southern California world as Shell. She runs her own agency, which she inherited from her beloved father, Hank West after he was murdered in a Long Beach alley. Finding his killer is what drove her into the business.

The Ficklings modeled Honey on Marilyn Monroe and some critics have described her as the love child of Monroe and Mike Hammer. The stories are hardboiled with lots of gunplay and seamy characters. Honey always carries a gun, usually a small caliber weapon that she can hide easily on her voluptuous body. She knows ". . . as much judo as the Japanese army."

As with Prather, the Ficklings gave the stories a lot of sex-infused zaniness and humor. Honey loses some or all of her clothes in every story, sometimes at the point of a gun.

"Honey West?" a deep voice asked as the office door closed.
"Yes."
"Stand up. Take two steps toward me."
"What is this?" I said, getting to my feet.
"Don't ask questions. Just take off your clothes."
"What?"
"You heard me. You have exactly one minute. Get started!"

Sometimes she loses them by accident as when a huge wave hits her in the Malibu surf and takes her bikini with it. Other times it's plain bad luck as when she gets into a game of strip poker with a man in an effort to find out if he has needle tracks on his arms. Unfortunately for Honey, the cards don't go her way.

We are frequently reminded that Honey is all girl, usually by the leering comments of the men she has to deal with.

"Speaking of bust," Hel said. "Don't you gentlemen agree that our fair captive has a generous amount of the same? What do you do in your spare time, baby? If it's what I think it is, you can count me in any time."

If we don't know what generous means, Honey will tell us.

"I hope I brought the right size bra," he said.
My skirt and slip dropped to the floor. "Thirty eight," I said, trying to focus my eyes in the semi-darkness. "Like the revolver of the same caliber. Is that what you're carrying?"

Whatever men think Honey does in her spare time, she doesn't. For all the banter, there is no graphic sex in the books, hardly any sex at all, in fact, merely innuendo. Though Honey frequently finds herself in compromising situations, she always manages to escape with her virtue intact. She meets many men who could turn her head, but she seldom gets laid. Often it's the men who get laid—laid out with a bullet or a fishing spear, for which she sometimes gets the blame.

The one man who always shows up, sometimes to rescue her, more often to arrest her, is Lieutenant Mark Storm of the Sheriff’s Department. It is implied in the sixth book that they have sex. The two frequently but heads in bouts of mutual exasperation.

"If you had any brains, you'd have married me long ago instead of running around half-cocked and half-naked."
"Lieutenant, I wasn't half-cocked or half-naked when you came in."

Storm is an example of what she is up against.

“You're mixed into this right up to your armpits. Damn you, Honey, for being in this crummy racket, for letting yourself in for capers like this where somebody is either stripping you down or taking wacks at you with a tommy gun. Any sensible woman your age would be married by now with a couple of kids. I figure you and murder are going to end up in the same hole."

Married by now with a couple of kids? She’s only in her twenties at this point, but this was the fifties when being a single, independent, professional woman meant that everybody questioned your motives, or your You don't know how hard it is being a woman looking the way I do.” Would V.I. Warshawski or Sharon McCone put up with the leering and male chauvinism that she endures?

ability, and every man saw you as fair game. Especially when you’re as sexy as Honey. You almost expect her to echo Jessica Rabbit: “

The ninth Honey West story, Bombshell, appeared in 1964. The tenth and eleventh books, Stiff As A Broad, and Honey On Her Tail, appeared in 1971. Between ‘64 and ‘71, private eye fiction suffered a near death and the sexual revolution happened. When we meet Honey again, she has abandoned the eye business for the spy business and is more sexually liberated, jetting around Europe, wearing and losing mod clothes, on the trail of agents of MAD. And, yes, she does finally get some behind-closed-doors action.

In 1965, Honey made the jump to television. She appeared first in an episode of Burke’s Law in which she managed to outwit the chief of police. She got her own series in 1965/1966, becoming the first female lead in a televised crime series. It was produced by Aaron Spelling and starred Ann Francis as Honey.  Spelling gave Francis outfits that emphasized her statuesque figure and good looks, but otherwise dropped the sexual innuendo of the books. In its place, they gave her James Bond gadgetry—listening devices disguised as martini olives or lipstick, gas-bomb earrings, a gas-mask garter belt, and a sleek, Cobra roadster.  She acquired a nosy Aunt Meg and a partner, Sam Bolt, who kept pressuring her to marry him. Her real love was her pet ocelot, Bruce. In nearly every episode, viewers were treated to lithe, blonde Honey tossing large men over her shoulder.

The series lasted one year, thirty episodes. Although popular, it was up against tough competition in the form of Gomer Pyle, USMC. The network declined to renew it for a second season, figuring it was cheaper to import a British series called The Avengers. For her role as Honey West, Ann Francis won a Golden Globe and an Emmy nomination. Aaron Spelling went on to do Charlie’s Angels.

Some of the Honey West books can still be found on eBay and Amazon. Honey In The Flesh, the fourth book in the series, is available on Kindle. The entire TV series is available on DVD.

Mark Troy is the author of The Splintered Paddle, The Rules, Pilikia Is My Business and Game Face.  His website is at http://marktroymysterywriter.com
Posted by Kevin R. Tipple at 12:30 AM


I remember the TV show and, like all red-blooded males, had a big crush on Anne Francis. I was sorry it ended so soon. Maybe someone will revive the character someday as a movie or TV show although I can't think of an actress with the right, uh, attributes, to play Honey.

There was a rumor circulating a few years back that Reese Witherspoon was going to do it, but that was quite a while ago and nothing seems to have come of it.