As far back as I can remember, Dad was an amateur radio operator. On more than one occasion I sat out in his office in our converted garage while he banged out Morse Code to fellow hams all around the world. That hobby was a major part of who he was all of his life. His framed license still hangs on the wall in his very packed office as is everything else exactly like he left it a little over three years ago when he suddenly passed. Like a lot of things, my Mom still won’t allow me to go in there and start doing the very hard task that needs to be done.

I thought a lot more about my Dad than usual while reading King’s Ransom by Ed McBain. Amateur radio plays a role in the read and there are references to the parts stores of my youth. Growing up, I spent many an hour with Dad in parts stories big and small while he surveyed rack after rack of parts. Dad built radio controlled planes from scratch (what some folks now call drones and come virtually ready to fly), radio controlled boats, and all sorts of other cool stuff. That gene bypassed me, who never had the manual dexterity for building stuff beyond models of various things, and went to my brother.

It was a far different world back then. Pretty much everything in my old neighborhood is gone now as it has been replaced by something else. Those kind of part stores have died out, my Dad has passed, and yet he lives on in me and my brother. His legacy lives on in a different way than Ed McBain’s and yet in some ways they are the same. Today on the blog we celebrate the legacy of Ed McBain. Both here and over on Patti’s blog where you can find more reading suggestions as part of Friday’s Forgotten Books.

It is October 1960 and Douglas King has worked himself to a position of some power at Granger Shoes. He has plans to move up and take over the shoe company as do others who intended to use him as a small part of their plans. Competing agendas and the future for Douglas King is at stake as his money is tied up in a deal to finally achieve his long held goal. A goal that he is not going to let anyone or anyone 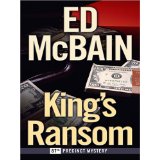 interfere with as he finally sees a real opportunity to fulfill his dream.

That future is not going to be thwarted by the kidnapping of a child. If it was his child, it might make a difference. It isn’t.  It is the child of King’s chauffeur so Douglas King does not see the need to pay five hundred thousand dollars to get that kid back. If he gives his money up to meet the ransom demand, he will lose his opportunity and will very quickly be forced out of a job. One does not launch a takeover bid and survive the failure.

The men of the 87th Precinct don’t see things the same way as Mr. King. Detectives Meyer Meyer and Steve Carella certainly don’t and never will. Of course, they never have had that kind of money working for the NYPD and never will. They are honest and hardworking cops who do their best day in and day out despite all the job stresses and everything else. A kidnapping case gives them a break from petty crimes, bad coffee, and dirty jokes. It is cold this October in New York and the next few hours will tell the tale.

King’s Ransom: An 87th Precinct Mystery by Ed McBain is a good classic cops and robbers style read. Along with the complex details of the business deal and the kidnapping case, readers are treated to the backstory of numerous characters and their own situations as day to day life is a business deal as well. Sometimes, by fate or chance, you make the wrong bargain with the wrong people.

I really like KING'S RANSOM when I read it decades ago. i reread it a couple years ago and discovered telegrams were still being delivered in that book. Talk about dating a mystery!

Yes, it does. That point really stuck out at me during the read.

You mean they're not still delivered??? Thanks for the update--honestly I've never sent one nor received one. Was hoping at least they still have singing telegrams. Then again, maybe they do at that. Oh, well. Enjoyed your review, Kevin.

You may already know this, but KING'S RANSOM was adapted into a very good film, Akira Kurosawa's HIGH AND LOW.

Thank you, Mathew. I think the singing telegram folks might still be around. I got a real telegram in the early seventies on my birthday from my Aunt wishing me a happy birthday.

Had no idea, SteveHL. Thanks!

Finally, after all these years (decades, really) I finally started reading Ed McBain. What a treat. King's Ransom is one I have yet to read, but am looking forward to it. Thanks for the interesting review, Kevin. -- DQ

Finally, after all these years (decades, really) I finally started reading Ed McBain. What a treat. King's Ransom is one I have yet to read, but am looking forward to it. Thanks for the interesting review, Kevin. -- DQ