In this fifth and final Truman Smith mystery, Galveston Private Investigator Truman Smith still has no interest in looking for anyone. Dino wants him to quit trying to figure why alligators and birds get killed and get back to finding people. Because of the backstory that series readers are familiar with, Truman is not remotely interested. Dino has pushed this same idea before, but this time he swears things will be different and wants Truman to trust him. 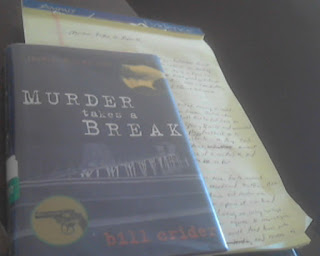 Truman knows better than that having heard the “trust me” line before. Instead of looking for folks, these days Truman works as a freelance contractor of sorts running a credit check or background on folks. It is the middle nineties and he can easily accomplish both from home when he is not reading a book. But, Randall Kirbo had come to Galveston back in March for spring break and vanished.  Nine months later the son of Jack Kirbo, who used to play football at the same time Truman and Dino did back in day, is still missing and Galveston PD has gotten nowhere. Jack and Dino were friends on the football team and still are as well and have had some business dealings that have worked out well for both parties. Because of all that and more, Dino wants Truman to see if he can find the kid.

December on the island means it is time for the annual “Dickens on the Strand” and the accompanying throngs of tourists and traffic. Certainly not two of Truman’s favorite things and neither are Mr. and Mr. Kirbo. Definitely not the boorish Jack Kirbo. His wife is devastated and just needs some sort of answer as to what happened to her son. It is because of her that Truman agrees to investigate the situation. That investigation will lead him to the underground party scene, a murder, and a lot more in Murder Takes A Break: A Truman Smith Mystery.

Fifth in the series that began with Dead on the Island, the character of Truman Smith is pretty well fleshed out as is his occasional sidekick, Dino. Readers know what makes Truman tick and what demons continue to haunt him. That leaves the book to be about the mystery and several are at work here in this complicated tale. As expected regarding anything from Texas legend and author, Bill Crider the book works on all levels. The twists and turns are many, the humor is occasional, the action is frequent, and the read is mighty good from start to finish.

For more reading suggestions today make sure you check out Patti Abbott's blog.
Posted by Kevin R. Tipple at 12:30 AM

Vvery much enjoyed this book and the series. As a reader, thank you!

Just the name "Truman" wins my interest. Looks like a good series. Thanks for the intro, Kevin.