Tomorrow is Halloween and while the focus is on scaring the heck out of folks, Halloween is also tied into honoring the dead. Back in December 2011 the world lost one heck of a writer and I lost a good friend. I had known that Milton was doing poorly at the time, but I thought he was getting better. Sandi had been recently diagnosed with cancer and things did not look good. Milton kept telling me she would be fine and in those dark early days he calmed me down  and helped me more than I can ever say. Then Milton went and I knew I never would ever hear again his gravelly voice across from his home in Tyler full of wisdom and vigor. It seemed like everything was falling apart and never would be right again.

Friday’s Forgotten Books hosted by Patti Abbott is all about honoring books and the authors that create them. This week I honor my friend for all too short a time, Milton T. Burton. The review below originally appeared in September 2011…


Following up on three very good books, the most recent being Nights of The Red Moon Texas author Milton T. Burton has brought forth an intriguing collection of short stories. These noir stories, seventeen in all, can provide pleasurable reading for those who enjoy noir as well as those who enjoy tales of mystery and science fiction. 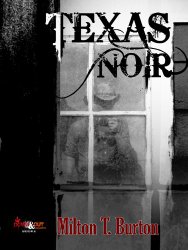 The book opens appropriately enough with “A Good Beginning.”  The narrator’s trophy wife has become a bit of a problem.

“What I wanted was to get laid about twice a week and be left alone the rest of the time.  Mistakes are made, you know.”

Another trip to Texas gives him an idea and equipment to take back to his home in New York.  His home is an 18th century manor style place located in the Hudson Valley. He has work to do and the money to make it all happen.

Galveston is home of one of the “Adjusters” in “Fine Tuning.”  Adjusters work hard to keep the parallel worlds in the past where they belong. If folks would just cooperate things would be settled. The job can be messy but the narrator loves saving the world in this time traveling story.

“Cherry Coke” is the title of the next story as well as the nickname of a gambler who won big one night while playing poker at Matty’s Truck Stop in Kilgore, Texas.  Sam MacCord was there that night and wondered how somebody who claimed to have never played before could walk away the big winner. While Cherry keeps playing the next months and winning on a regular basis, Sam starts looking for answers.

Vampires don’t usually try to pick up women in trendy bars on lower Greenville Avenue in Dallas. Biology major Liddy is a vampire’s target for damn near anything in “Fangs.”  Whether she has it in her to resist is the question.

Seemingly every Texas author has to write a story connected to the Kennedy assassination. It seems hard wired into the DNA of many Texas writers. Such is the case here with “Grassy Knoll.”  The second shooter theory is alive and well and explained in this short story.

The problem with hitchhiking is you have to pretty much go with the ride you are offered.  In “Hobby” Sam MacCord isn’t impressed with the two specimens of humanity in the van in front of him.  Despite having the appearance of a harmless hitchhiker out in the middle of nowhere, Sam MacCord is none of that.  He is a man on a mission to get back what slipped through his fingers years ago well as clean up the planet one person at a time.

Sheriff Bo Handel makes an appearance in “Old Ira’s Still.”  The ATF is in Caddo County looking to bust Ira Blevins’ still and they expect Sheriff Handel’s full cooperation.  It may be illegal, but Blevin is 76 and not making enough moonshine to matter to anyone except for two hot shot ATF agents. The ATF folks aren’t the only ones poking around as the DEA is back with their own agenda. Sheriff Handel has a plan to deal with all of it in order to send the assorted feds back where they come from.

The old Texas cattleman has made his first trip to New York because he wanted to see his only granddaughter.  But, he got more than he bargained for when he saw a mob boss lose his head over at the next table in “The Collector.”  Not that it bothered him since he saw much worse things in the war. He can also identify the suspect who is rolling a few more heads that night.

It’s back to Texas, Lubbock in particular, in “Quicklube: A Fable.”  Some things don’t change and you take what you can get for services in this short and twisted tale.

In what has to be one of the funniest stories I ever read anywhere, a shopper deals with a problem in “The Watchers.” This story can’t be explained without ruining it. It can only be read and enjoyed.

It is 1927 in Smith County in “Vessel unto Honor.”  Reverend Booker T. Olmstead has gone to considerable trouble to get to a phone and the Sheriff takes the urgent request for help seriously. But, sometimes you just have to let folks help themselves when the law can’t.

Author Milton T. Burton takes readers further back in time in the next story, “Thrice Hanged Throckett.”  1878 is the year and Gabble, Texas is the place. Everyone knows how things work in Gabble, Texas.  Even the governor.  At least the biscuits down in the café are good.  If the first hanging had worked, things would have been so much simpler.

A dream has significance in “The Day of the Hornet.”  So too does the 1951 Hudson Hornet in the dream. The car is black, has the number D3 painted on its side, and is driven by a living skeleton. Years later the narrator sees the car and driver again and this time it is no dream.

The book follows with “The Gipper in Purgatory.”  Or, at last, a story built around Ronald Reagan trying to explain a few things.

Breakfast once a month down at the old fashioned café on Elm Street was one of the high points of his life. Sam MacCord didn’t need it ruined by the whining fool at the next table that Friday morning in “The Apprentice.” So he joins the young man and his companion and offers to help.

The book ends with “The Question.”  Answering the question may not change anything.

Skipping across time and around the country these tales tend to the dark with a hint of humor thrown in. They often feature characters that are mistaken for fools because of where they live and their folksy ways. The tales often twist back on the reader in unexpected ways and almost always feature a lesson on applying justice to those who deserve it. Every single story is good one and well worth your time.


Material supplied by the author in exchange for my objective review.

Touching tribute to a friend, Kevin. His novel sounds like a winner.