Blowing the dust off another older review from the dark ages of this blog for Friday’s Forgotten Books hosted by Patti Abbott. I have read a few of Louis L’amour novels, but not this one reviewed by Barry Ergang.  Journey back to those days of yesteryear by way of SON OF A WANTED MAN by Louis L’Amour.

During the course of the past year and a half or thereabouts, I’ve become happily reacquainted with one of the joys of my childhood, the western. It began when Turner Classic Movies ran a Roy Rogers movie marathon. This in turn prompted me to rent Hopalong Cassidy films from Netflix, and to buy some from Amazon.com. I also rented movies, primarily the kind of B-westerns I grew up watching on TV in the early 1950s, featuring other cowboy stars: Buck Jones, Bob Steele, Allan “Rocky” Lane, Lash LaRue, “Wild Bill” Elliott, Tim Holt, Dick Foran, Charles Starrett as the Durango Kid, and Bob Livingston, Ray “Crash” Corrigan, and Max Terhune as the Three Mesquiteers. My Netflix queue is loaded with others yet to come. 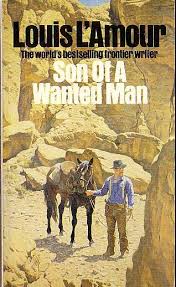 For all that I enjoyed watching westerns, I’d read very few. Except for a handful of short stories (mostly found at the Online Pulps website), the only novel I’d read was Cormac McCarthy’s All the Pretty Horses. I remembered Louis L’Amour from his instant best-sellerdom years ago. When a neighbor’s yard sale made his Son of a Wanted Man available, I bought it.

In it we meet Mike Bastian, who has been raised from childhood by his adoptive father, Ben Curry, for the life of a successful outlaw. As one of his “trainers,” a man named Roundy, says:

“…You can track like an Apache. In the woods you’re a ghost, and I doubt if old Ben Curry himself can throw a gun as fast and accurate as you. You can ride anything that wears hair, an’ what you don’t know about cards, dice, roulette, and all the rest of it, nobody knows. You can handle a knife, fight with your fists, and open anything made in the way of safes and locks.

“Along with that he’s seen you got a good education, so’s you can handle yourself in any kind of company. I doubt if any boy ever got the education and training you’ve had, and now Ben is ready to step back an’ let you take over.”

Ben Curry has never been caught because he’s smart, he’s a careful planner, and unlike other outlaws, he doesn’t want a “reputation.” His wife and daughters, who live back east, don’t know anything about this aspect of his life. They think he’s a rancher named Ben Ragan whose business transactions keep him traveling a great deal of the time. Curry has been highly selective about the men he uses to pull off the robberies he plans. He wants men who also don’t seek to advertise themselves as tough criminals. 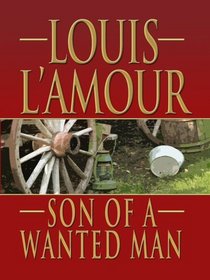 What he doesn’t know is that two tough lawmen, Borden Chantry and Tyrel Sackett, have begun to detect a pattern in his modus operandi, and are closing in.

Mike Bastian’s problem? Deciding whether he wants to lead an outlaw’s life or stick to the straight path.

As events unfold, the matter is largely decided when Curry’s life and the life of one of his daughters, Juliana, is threatened by a band of men Curry recruited and who have, for years, benefited by his recruitment. Harrowing circumstances compel Bastian and others loyal to Curry to try to hunt down these renegades. Among the hunters is Curry’s other daughter, Drusilla, to whom Bastian is strongly attracted—and vice versa.

Since this is the first novel I’ve read by the late Louis L’Amour, I can only assume it’s representative of the way he wrote his many other novels. He was clearly a storyteller, and a man who wrote in a style free of any verbal furbelows and flourishes. The story itself is compelling, even if there are passages here and there that are repetitious, and despite the intimacy between Mike Bastian and Drusilla Ragan that strikes me as abrupt and false as the almost instant, unlikely connections seen in many B-western films.

L’Amour has one mannerism—in this book, at least—that’s annoying in its misuse. He’s fond of sentences that open with participial phrases, sentences meant to describe simultaneous actions. All too often, the simultaneities he describes are impossible. If I write, for example, “Striding across the floor of the bunkhouse, he unbuckled his holster,” the reader can picture someone walking and unbuckling at the same time. Now consider a line from L’Amour. After telling us that Borden Chantry “went to the stove for the coffeepot,” implying that he had to rise from his seat, move across the room, and then fill his and Sackett’s cups, he writes, “Returning the pot to the stovetop, he sat down, straddling his chair,” suggesting that Chantry is the Old West’s equivalent of Plastic Man. Here’s a “twofer”: “Walking back to the table Dru took the chimney from the lamp, struck a match, and touched it to the wick. Replacing the lamp globe she drew back a chair.” This is a flexible, multi-talented multi-tasker!

In both examples, the addition of the word “after” at the beginning of each sentence would have corrected the errors.

You may have also noted that the second L’Amour example could stand some commas. Which is to say that Bantam Books, the publisher, could have used a good copy editor. Then again, considering the general quality of book editing for years now, along with the way English is taught, I’m not sure the majority of readers will notice the grammatical nits I’ve picked.

Nits notwithstanding, Son of a Wanted Man is a fast-paced, exciting piece of entertainment. It may not be a masterpiece, but it’s a lot better than a Tex Ritter movie.

Derringer Award-winner Barry Ergang’s work, including his locked-room mystery novelette The Play of Light and Shadow, is available at Amazon and Smashwords, along with other stories and collections.
Posted by Kevin R. Tipple at 12:30 AM